A Suffolk man was convicted on four felony charges Friday after a two-day jury trial.

However, Maurice Dontrell Boykins, 28, was acquitted on charges of attempted murder and assault and battery of a law enforcement officer.

All of the charges stemmed from an attack on officers at the Western Tidewater Regional Jail on Oct. 5, 2014. Boykins attacked two correctional officers with a razor blade when they entered his cell. 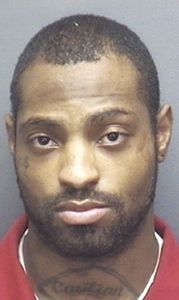 According to prosecutor Vaughn Breedlove, there had been an allegation that Boykins had spit on an officer passing by his cell. Because Boykins’ cell was near a door, officers were concerned he would continue to do it as officers made their rounds.

When the two officers entered his cell to move him, “he greeted them with the razor,” Breedlove said. “When they went in, he started swiping.”

They were able to subdue him, put him in restraints and take him to get checked out by medical staff at the jail.

One of the officers received a gash on his face that required medical treatment.

In the aftermath of the incident, somebody heard Boykins say, “If I’d had a knife, I would have killed him,” Breedlove said.

Breedlove said the jury recommended a 30-year sentence. Boykins was convicted on malicious wounding, shoot, stab, cut or wound, possession of a deadly weapon by a prisoner and assault on an employee by a prisoner.

At the time of the incident, Boykins was awaiting sentencing on a December 2013 shooting at the Suffolk West Shopping Center, which injured two people and damaged two vehicles and two storefronts. He later received a sentence of 30 years to serve for that shooting, as well.