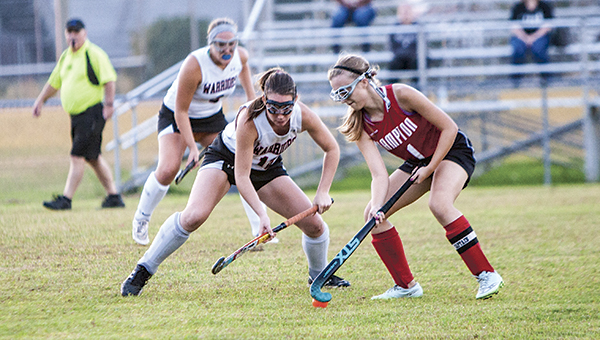 A local field hockey player has joined the ranks of Suffolk’s junior Olympians.

Ashlyn Rogers of Nansemond River High School was selected for the AAU Junior Olympics U-16 field hockey team. Though Rogers has seen lots of success with her school and club teams, the AAU opportunity will offer a new challenge for her.

“I’m excited,” she said. “It’s great to work hard and be rewarded for it.”

Rogers, 15, is a rising junior at Nansemond River High School. Her father, Gabe Rogers, coaches softball, which she also plays, at Nansemond River. He said the family is proud of the work Rogers put in to make the team.

“Her mother and I are very proud,” he said. “We know how much hard work she had to do to get where she is.”

Hard work is a concept that comes up often in connection with Ashlyn Rogers. She said the key to becoming a good player is putting in the extra effort.

“I put in extra hours of work and looked for ways to get to the next level,” she said.

Rogers has been named to the all-conference first team for the past two seasons and has verbally committed to play Division I field hockey at Liberty University after she graduates in 2018. But even though she has accomplished a lot already in her short high school career, she knows she can’t rest on her laurels.

“Lots of people think they can just coast once they’ve committed,” Gabe Rogers said. “Ashlyn knows she has to keep pushing harder to be prepared for the next level.”

The top players in the country will gather in Houston in August to compete in the Junior Olympics. It would be easy to get caught up in the spectacle of the event, but Rogers said she will have to keep her head down and work hard if she wants to succeed.

“I know a lot of very talented players will be there,” she said, “so I need to be on my A-game.”

Rogers plays softball and club field hockey, in addition to starring for her school team. She credits her coaches for her success. Scotty Tyson, coach of her club team, Saints Hockey Rocks, said she is well-suited for the Junior Olympics because of her unselfish play and mental toughness.

“She’s pretty resilient,” Tyson said. “She doesn’t let mistakes affect her. There aren’t a lot of mentally tough kids out there, so she’s special.”

Saints Hockey Rocks will compete in a national club championship in two weeks, where the 16 best clubs in America face off. Rogers will have a summer full of the toughest competition available, but Tyson said he has no doubt she will thrive.

“If she keeps working hard, there’s no telling how far she can go.”

Rogers said she plans to continue improving, with a dream of making it to the Summer Olympics in 2020.

“It’s a big dream,” she said, “but there’s always a possibility.”