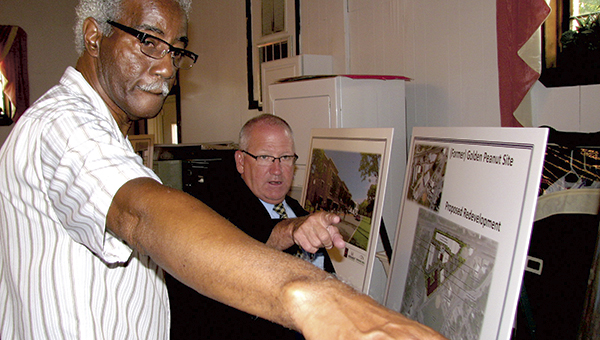 About two dozen residents of the Saratoga area attended a Thursday evening meeting to learn more about a proposed residential development on a vacant industrial site in their neighborhood.

The Monument Companies proposes to turn the former Golden Peanut site, bordered by South Saratoga Street, Wellons Street and a railroad crossing, into an apartment development with nearly 300 units.

“There were a whole lot of rumors going and the only way we get the real information is all to come together at the same time,” Councilman Curtis Milteer said, explaining why he asked city staff to hold the meeting, which was hosted by Faith Temple Apostolic Church. “When we leave tonight, we all will leave on the same note.”

The site currently holds a heavy industrial zoning, and Tom Dickey of the Monument Companies said the company is in the process of preparing its rezoning application, which will go through a formal process including public hearings at the Planning Commission and City Council levels.

“I think overall, it should be good for the neighborhood,” Dickey said.

He showed residents maps of the proposed development. It will include the existing industrial buildings renovated into apartment buildings, as well as new construction.

Dickey also showed pictures of interiors at the company’s other downtown Suffolk projects, including the Lofts at East Point and the Lofts at One Eleven. The Golden Peanut apartments will have “a very similar look,” he said.

“We’re going to preserve the architecture of those buildings,” he said. The company will use historic tax credits and make an estimated $30 million investment for the project.

“It should help increase values in the neighborhood, because nobody wants to have a vacant industrial building next door,” Dickey told the residents.

He said he doesn’t anticipate much impact to the neighborhood.

“We think the impact to the area’s going to be pretty minimal,” he said. “I think the traffic impact will be a lot less than if another heavy industrial user had come in.”

He added that the effect on schools will also likely be minimal. Few school-age children live in apartments with only one or two bedrooms, he said.

“People that have school-age children tend to live in houses,” he said. The apartments will range from $985 to $1,350 for rent, including utilities.

The development likely will take four to five years to complete, Dickey said, and will have its own designated parking. The final phase of the development could be new construction that has commercial space as well as more apartments.

Dickey also added that the 290 or 295 number of apartments could go down before the project is finalized.

Many residents questioned Dickey about what would happen to a separate industrial site adjacent to the Golden Peanut site. One neighbor, Calvin Prince, said he would like to see that site become open space or a community center.

Dickey said he would be in favor of redevelopment on that site, as well. Deputy City Manager Scott Mills said the adjacent site’s owner is aware of the city’s interest in redeveloping it.

“I’m not going to let up on them,” Prince said. “We need a community center here.”

Another neighbor, Alfred Colander, said he is in favor of the project.

“I think this is going to be fantastic for the neighborhood,” he said. “It will lift the whole community up.”

By Henry Luzzatto Correspondent It turns out that nice teams don’t finish last. Lakeland High School was rewarded for its... read more