Blythe finishes ahead of the game

Former King’s Fork softball standout Megan Blythe recently wrapped up her collegiate career and earlier this month got the unique opportunity again of competing in the sport internationally. 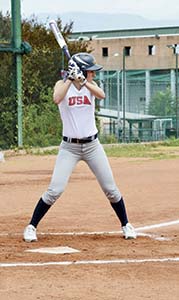 Megan Blythe of Suffolk competes in Italy as a member of a USAAI softball squad in 2015.

Blythe saved arguably her best for last at West Virginia University Institute of Technology, batting a team-best .423 in 49 games with seven home runs, 39 runs batted in, four triples and struck out just 13 times.

“This past season was vital,” Blythe stated. “I did not have a good season my junior year, so my senior year was all about getting back on my game. I had to put in a great deal of extra work.”

For her efforts, Blythe received First Team All-American for the United States Collegiate Athletic Association for a third time as well as First Team All-Conference.

With that success on the diamond has come some other perks, most notably getting the chance to participate on the USA Athletes International Team last summer in Italy and this year in Aruba.

The visit to Italy was a special one, Blythe said, as the team was the best she’s been on, in her own words. It also proved more competitive, yet she cherished her time in Aruba and took away quite a bit.

“Aruba was absolutely wonderful. We did quite a bit of exploring of the island and we played five games. (The) trip was a humbling learning experience,” Blythe said.

“Softball is not as big in other countries as it is here. Therefore, when USA teams travel to other countries, a lot of the teams are hoping to learn from us. They also don’t have adequate equipment to play with, so at the end of our trip several players donated our own equipment to the locals.”

Having now graduated from WVU Tech, Blythe looks back on her time there with no regrets, realizing she achieved a considerable amount.

“I would have liked to play at a higher level, such as a small D-1 school. However, I did excel at Tech. There were several opportunities for me to learn and grow. Receiving First Team All-American for three of my seasons is probably the accomplishment I am most proud of,” Blythe said.

For the young females with aspirations similar to Blythe in softball, she offered up some advice.

“I would tell them to work hard. Be the first one on the field and the last one to leave. “Being a college athlete is no joke. You must put in extra work outside of practice, and all the while, you must keep up your grades,” she said.

“Also, do not choose your school based on strictly softball. Academics are extremely important, and you need to choose a school where you can excel in them.”

With the latest chapter in her softball story complete, what’s next for Blythe?

“Right now, I am taking a few prerequisites for grad school at TCC. In the spring, I will be applying to the Army-Baylor Physical Therapy Program. If I get into the program, I will be an officer in the U.S. Navy,” Blythe said.

“Upon graduation, I aspire to work with the Wounded Warrior Project. If I am accepted (to) Baylor, I will apply to local schools.”

Blythe also is currently working with a local youth softball team and providing lessons in her free time.

Parks and Recreation offers tennis lessons to all ages