The Windsor Library and Windsor High School hosted the first summer reading program event of the year on Tuesday, with MAD Science of Hampton Roads presenting. 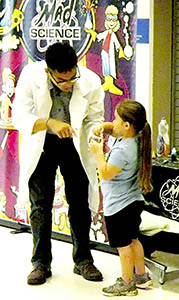 Geology Jay and his volunteer mix together the two chemicals that react to form rapidly solidifying polyurethane.

Children watched in awe as “Geology Jay” performed experiments that taught basic scientific concepts such as chemical and physical changes, acid and base reactions, centrifugal force and the process of evaporation.

“I think it sparks their interest and inspires them to read about science,” said Laura Lombard, branch manager of the Windsor Library. “It keeps them in the groove. During the summer, if they’re not really exposed to reading, they can lose a lot of learning material.”

The first experiment saw the creation of a “helping hand,” with rapidly solidifying polyurethane, followed by a demonstration of the indicator phenolphthalein, which reveals whether a given substance is an acid or a base.

Observers also watched as Geology Jay swung a cup of water around in a full circle so fast it wouldn’t spill in a show of how centrifugal force keeps a body in its place while on rollercoasters and similar rides.

“I don’t have many accidents. But if the front row gets splashed, I’m sorry,” he said as he spun the cup.

Finally, the children were amazed when Geology Jay created a “flaming didgeridoo” by pouring ethanol into a long tube and setting it aflame, resulting in a loud whistling sound, similar to the Australian wind instrument known by the same name.

The summer reading program will continue with weekly events through Aug. 2. Planned events include a Craft Day at the Windsor Library on Tuesday; Batworld, an exhibition celebrating the nocturnal animals, on July 12; and JB Rattles Snake Show on July 19. All events will be held in the Windsor High School Cafeteria.

“I guess we kind of have a biology theme this summer,” said Lombard.

The summer reading program has set a 10 book-a-week goal for those children reading picture books, and two chapter books or teen-level books for older readers.

“It’s really easy for people to catch up if they join later in the summer,” explained Lombard. “So people can just jump in.”