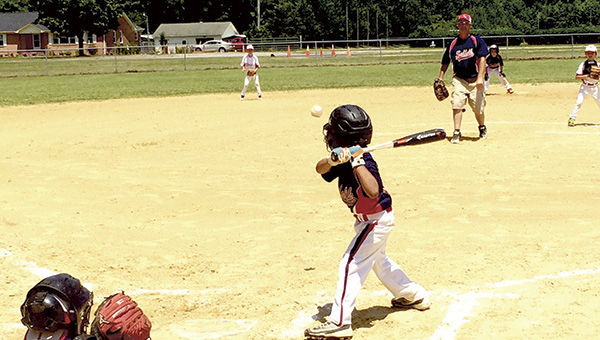 The Suffolk Youth Athletic Association Super Sevens compete in its sectional tournament on Wednesday. They pulled out a hard-fought, one-point victory against Southern Chesapeake to cap off the tournament.

Suffolk’s youngest all-star team is also one of its most successful.

The Suffolk Youth Athletic Association Super Sevens is an all-star team made entirely of 7-year-olds who play in SYAA’s Pinto division. Pinto is a coach-pitch division of Pony baseball for 7- and 8-year-olds.

The Super Sevens became top dogs in the region when they won their sectional tournament on Wednesday. For the final, they fought a tough, testy game against Southern Chesapeake. The game was tight until the end, but the Suffolk Super Sevens came out on top with an 11-10 victory.

“It could’ve gone either way,” said Tommy Ricks, the team’s head coach. “But the boys showed guts and stuck it out to the end.”

Christopher Ursery, the team’s second baseman, said the tournament was the team’s toughest challenge so far.

“I loved the tournament,” he said, “but it was really hard to beat them and make it on base.”

Despite the difficulty of the competition, the SYAA team came out victorious, adding another trophy to the cabinet. They are undefeated so far this season.

Nicholas Thompson, who plays third base and center field, said the success was a result of hard work put in during practice.

“We hit well, we know the right plays and we always work hard,” he said.

Chris Ursery, one of the team’s assistant coaches, said the sectional tournament was the toughest accomplishment of the year.

“It feels like it’s been a hard road fought,” he said.

The sectional tournament is no doubt the crowning achievement this season. Because of the lack of competition in the area, 7-year-old teams cannot advance past the sectional stage, meaning the team will have to search for success somewhere else.

The Super Sevens won the Jim Green Invitational tournament earlier this season, and are currently playing in the SYAA Pinto Blowout Tournament.

They are in search of continued success in the SYAA tournament, after making it to the finals after winning a hard-fought game against Great Neck. SYAA won 20-10.

The team’s optimism is high, as catcher Cameron Chaney said they all think they will win the tournament.

The Super Sevens know they can’t rest yet. Next year, the players will hope to make the all-star team for the 8-year-olds. Some are even looking ahead towards the Mustang division for 9- and 10-year-olds, the first division where kids pitch.

Cody Ricks said he is already training to be a pitcher in the Mustang division.

Ricks went on to say that the hard work has been key to the team’s continued success. He said that the sectionals tournament was tough, but it was a great experience.

“It was fun because it was hard,” he said, “and I like to do hard things.”

Blythe finishes ahead of the game