Trey Wren’s golfing talents may not be news to some Suffolk residents, but his recent tournament performance could put him in the spotlight statewide. 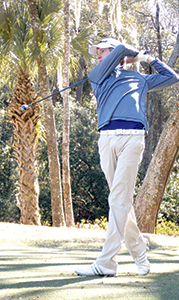 Suffolk native Trey Wren competes in a prior tournament. Wren turned in a stellar performance at the VSGA Amateur tournament last week, putting himself on the statewide golf radar.

Wren, a 2014 graduate of Nansemond-Suffolk Academy, made it to the semifinals of the VSGA Amateur tournament last week. He lost 5-and-3 in match play to the eventual runner-up, Ji Soo Park, on Friday.

Despite being eliminated, Wren said he did exceptionally well in the tournament.

“There were a lot of positives,” he said. “I’ve played like this in the past, but this was definitely one of the best tournaments I’ve played.”

The tournament began with 140 players, the top 32 of which moved on to match play at the Pete Dye River Course at Virginia Tech.

Wren began the tournament with a solid, if unspectacular, 2-over 74 in his first round of stroke play. The next round began unfortunately, as Wren double-bogeyed the first hole, but he kept his cool. He had five birdies and no more bogeys en route to the joint lowest round of the day with a 3-under 69.

Wren was seeded second as the tournament moved on to match play.

He began match play with a resounding 8-and-7 victory over Buck Brittain.

“He played well,” Wren said, “but the course was long, which gave me the advantage.”

Wren continued through the tournament’s round of 16 and quarterfinals, beating Ryan Patrick and Justin Young on Thursday and Friday.

On Friday afternoon, he squared off against his most difficult opponent yet: University of Virginia graduate Ji Soo Park.

“He played the best round I had seen,” Wren said. “I played pretty well, but he drilled me.”

“I had been playing well, so I kind of expected to do well, but not too many other people did,” he said. “I came somewhat out of nowhere.”

Wren said he hopes to keep the run of good momentum going. After the VSGA Amateur tournament ended, Wren participated in a qualifier for the Virginia State Open. He will be an alternate for the tournament.

He will also play in the 60th Eastern Amateur tournament in Portsmouth, which starts Thursday.

Wren said the schedule is demanding, but he can handle it.

“I make sure to take a day or two off between tournaments and try to keep the same mindset going,” he said.

He said his goal for the summer tournaments is to continually be in the top 25 each tournament.

“My goal is to play well, not miss any cuts and have a chance on the weekend,” he said.

Wren said the tournament play will prepare him for his second year of college golf.

Wren is a rising sophomore at Temple University. He said he has grand plans for the coming school year.

“I would like to win a tournament,” he said. “It’ll be tough, but if I play the way I played last week, I can win a college tournament.”