A Girl Scout from Suffolk has won the rare honor of being asked to help plan a major national event for the organization.

Every three years, Girl Scouts from across the country convene for their national convention. It’s a four-day experience where the national board is elected, governance decisions are made, female leaders deliver empowering keynote speeches and Girl Scouts get to meet new friends and swap program ideas. 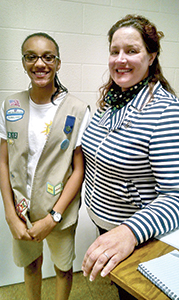 Cree Diggs-Brown, a Suffolk Girl Scout, was selected to participate on a 21-member team of Girl Scouts from 17 different Girl Scout councils in the country to help plan the 2017 Girl Scout National Convention. Cree is pictured here with Girl Scouts of the Colonial Coast CEO Tracy Keller. (Submitted Photo)

Preparations are already under way for the next Girl Scout National Convention, scheduled to take place in Columbus, Ohio, in 2017. For the first time ever, Girl Scouts of the USA has put together a movement-wide team of girls to help plan the big event.

Suffolk resident Cree Diggs-Brown, who participates in Scouting through the Girl Scouts of the Colonial Coast, has been selected to participate on this 21-member team of Girl Scouts from 17 different Girl Scout councils in the country.

Diggs-Brown, who has been a Girl Scout for seven years, is an active member of her troop and learned about applying for the convention planning team from her troop leader, Dina Crewe.

As a member of the planning team, Diggs-Brown will take part in virtual monthly meetings and three face-to-face meetings, including one in Columbus this July. Next summer, the team will meet at the Girl Scout central office in New York City, and their third meeting will be at the convention.

“Now, we are primarily working on the Hall of Experiences, which is where we’ll have interactive activities and vendors, as well as programs and evening events,” Diggs-Brown said. “We are also helping to approve other aspects, such as the design of the logo for convention.”

For Diggs-Brown, being a Girl Scout is an important part of her life. She says Girl Scouts has helped her build self-confidence and make great friends and has provided opportunities for her to make a difference in her community.

In the past year alone, Diggs-Brown has accomplished many things as a Girl Scout. She earned the Girl Scout Silver Award, which is the second-highest award a girl can earn in Girl Scouts. She has also participated in numerous community service projects, including a pajama collection, multiple food drives and laying wreaths on veterans’ graves before the holidays.

As a member of Troop 4312, Diggs-Brown has had time for fun activities, as well, including a trip to Roanoke Island Festival Park on the Outer Banks, a tour of the USS Eisenhower, a dolphin-watching excursion, a night at Harbor Park for Tides baseball and a technology workshop at the Apple Store.

Diggs-Brown says she looks forward to sharing her Girl Scout experiences with her fellow planning team members to make the 2017 Girl Scout National Convention the best one yet.

“I am most excited about the actual national convention, where I can see the work and time we put into planning come to fruition,” Diggs-Brown said.

Steven Utley, son of Wayne and Suzana Utley, has earned the rank of Eagle Scout, the highest achievement in Boy... read more