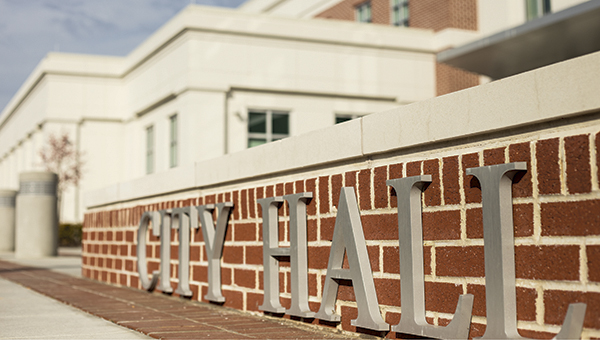 Mayor Linda T. Johnson held a meeting for local clergy at City Hall on Friday after a week of devastating national news, including the police shootings of two black men and the deaths of five police officers during a Dallas protest.

As she watched the news on Friday morning and pondered the events of the previous 72 hours or so, Mayor Linda Johnson knew she needed to do something.

With five police officers dead in an ambush in Dallas after a Black Lives Matter protest where the police were on hand to ensure the public safety and with the nation already reeling from the police shootings of two black men in Minnesota and Louisiana, she said Friday afternoon, “I was feeling sad for our country.”

Johnson said she also was feeling determined not to let racial tensions spiral similarly out of control here at home.

So she called Vice Mayor Leroy Bennett and they got Suffolk Chief of Staff Debbie George engaged in an effort to put together a meeting for as many of the city’s clergy as possible Friday afternoon.

Officials hope that meeting, held behind closed doors at City Hall from 4 to 7 p.m. Friday, will lead to significant efforts to bring communities together in Suffolk.

“The clergy have always wanted to get involved with the relationship between the city and the community,” Bennett said after the meeting, which was closed to the media.

“I really think this is the start of something,” George added.

Most of the ministers leaving the meeting declined to comment about what was said inside the City Council conference room, citing an agreement they’d made that, as explained by the Rev. Skip Irby, “What’s said in here stays in here.”

Mayor Johnson said she expects the ministers to put together an agenda for a coming meeting, and she promised there will be public forums and other opportunities for engagement in the future.

Other local reactions to the news this week were similar to what Johnson described as her own.

“When I read about it this morning, my heart just dropped,” said Costellar Ledbetter, president of the Suffolk NAACP, said in a phone call Friday.

Bob Stephens, the co-founder of Suffolk’s Community Action Coalition, said the entire country was shocked by the events.

“I think all of us, locally, nationally and globally are taken aback by what happened and our own emotions,” he said.

The Suffolk Police Department expressed its sympathy for those affected by the shootings in a statement written by Maj. Gerald Brandsasse and issued by Tim Kelley, media and community relations manager for the city of Suffolk.

After expressing sympathy for the victims and their families, the statement turned its attention to an assessment of the relationship between Suffolk police and their community: “We as a department have worked very hard to develop positive, professional relationships with our community and we will continue to do so in the coming days.”

Friday evening, Brandsasse, who was filling in for Chief Thomas Bennett for the day, said he’d sent an encouraging message to his officers at the start of the day and had forwarded another to them that Mayor Johnson had sent him.

“In light of the horrific events in Dallas overnight,” she wrote, “I struggle this morning with how each of you must feel as you put on your uniform and badge to do what you do so well every day — serve and protect the citizens of our community. Please know that I walk beside you in spirit and appreciate your professionalism, service and love for our city. May God bless and protect you today and every day.”

Brandsasse said he had encouraged his officers to “be sensitive to citizens’ concerns nationwide.”

The police massacre in Dallas came in the wake of two highly publicized police shootings of African-Americans in two days. Mass protests gathered in cities across America to address the issue of racially motivated shootings by police.

“There are lots of feelings of oppression and unfair treatment,” said Stephens, from the Community Action Coalition.

He added we are unlikely to see mass protests in Suffolk, but many people are sympathetic to the demonstrations.

“We need to engage everyday, ordinary people to bring about the understanding of our issues,” he said.

Though Stephens and Ledbetter both expressed sympathy for the protests against the police shootings, they both said violence was the wrong way to respond.

“You don’t do evil to avenge evil,” Ledbetter, the NAACP leader, said. “There’s nothing you can gain from that.”

Isle of Wight Sheriff Mark Marshall stressed that unity between the community and local police forces is essential. He sad a flagging relationship between both groups contributes to the stints of violence and uproar around the nation.

“Transparency and community engagement by all we serve is critical for solving issues,” Marshall said. “We are invested very deeply in our community. It’s a No. 1 priority for everyone in this office.”

Marshall also pointed out that social media can prove to be destructive and often agitates race and police relations.

“People are making snap decisions about the videos they see online, which don’t tell the whole story,” he said. “Everyone is talking, and no one is listening.”

Ledbetter said the tension between police and black Americans needs addressing, but must be handled through community discussion.

“We have to come together in groups to try and strategically stop the behavior,” she said.

Kelley, Suffolk’s spokesman, said Suffolk’s annual National Night Out, set for Aug. 2, would offer an opportunity to do just that.

National Night Out celebrations are held in various communities throughout Suffolk. They allow an opportunity for citizens to interact with people in law enforcement and work together to fight against crime.

“It’s a good opportunity for community interaction,” Kelley said. “Public safety officers are able to interact in such a joyous event.”

Mayor Johnson agreed. “They’re out there cooking fish, lobbing balls and playing with kids,” she said of police officers involved in the event, and the relationships police have built during past Night Out events has even helped them solve crimes.

Stephens said National Night Out would give people an opportunity to interact with police and create a better understanding between the groups.

“Every police department should engage with the community and make sure they have good relationships with the people,” he said.

“I still believe that relationships are important and primary,” he said.