A protest and prayers 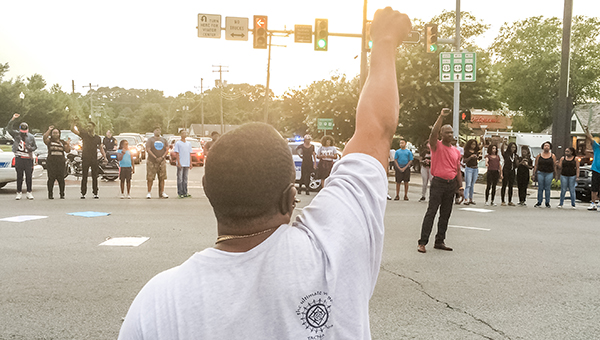 Protestors form a circle in the intersection of North Main Street and Constance Road about 7:25 p.m. Monday evening.

Between 70 to 100 protestors marched down Main Street Monday evening in a show of support for the Black Lives Matter movement.

Other cities in Hampton Roads held demonstrations on Sunday, but that did not mean Monday’s Suffolk march was any less important.

“Many people think Suffolk is a sleeping town but we are in fact very woke,” said Tyron Riddick, chief executive officer of Straighten Up and Fly Right.

The protestors gathered at the intersection of Main and Market streets to express solidarity with protests across the country in the wake of police shootings last week. 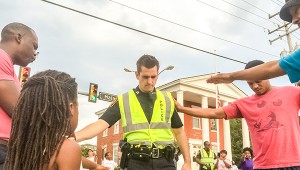 Demonstration organizers, including Domenick Epps, at left, pray with Capt. T.A. Smith of the Suffolk Police Department in the intersection of North Main Street and Constance Road Monday evening.

“We are living in the last days,” said Gloria Hunt, one of the protesters. “We need to pray, fast and ask God to help this nation.”

“We’re supporting the cause,” said Jaelah Persawl, one of the attendees. “We want to stand up for our brothers and sisters.”

Local minister James Golden led the march up and down Main Street, shouting slogans such as “Hands up, don’t shoot,” “No justice, no peace,” “Black lives matter” and “All lives matter.” The demonstration formed a circle at the intersection of Main Street and Constance Road, while police officers stopped traffic.

Protesters held hands, and community leader Domenick Epps prayed for blessings and protection, while emphasizing the importance of the march.

Epps prayed for the police, asking the group to stretch their hands toward one of the officers present, praying for him to stay safe.

The protest was met with support from some onlookers. People driving by honked, waved and held up fists in a display of solidarity. Some even decided to join in on the march.

However, a few passers-by called out racial slurs and derogatory remarks. One black man drove by several times flying a Confederate flag with an image of a rifle superimposed on it.

Some arrived at the protest to march with the police, showing support for law enforcement after the attack in Dallas that left five officers dead.

“We need our police to feel supported, especially now,” said Estelita Buie, who came to walk with the officers. 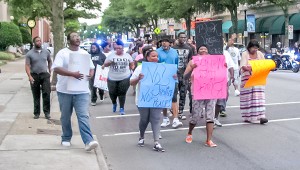 Protestors begin their march down North Main Street about 7:10 p.m. Monday. Many carried signs with slogans such as “Black lives matter,” “All lives matter” and “No justice, no peace.”

Though Black Lives Matter protesters and pro-police supporters have been portrayed as on opposite sides of the issue, they agreed that the Suffolk Police Department deserves support.

“We have a good police department here,” Buie said.

“We don’t have problems like that in Suffolk,” she said. “Our police treat us right.”

Maj. Gerald Brandsasse of the Suffolk Police Department said the event was positive. About 20 police officers in vehicles, on motorcycles, on bicycles and on foot were in the area during the protest. Some blocked traffic, some walked with the crowd, some brought up the rear and others were staged in parking lots along the route.

“It was very peaceful and very well received by the police staff and the community people that were involved,” Brandsasse said. “I feel it was a great bridging opportunity for public relations.”

He said no arrests took place during the demonstration, which took about 50 minutes, including speeches on the sidewalk after the protestors exited the street.

“Our intent was to make sure the community had the opportunity to voice their concerns and send their message,” Brandsasse said. “Understanding how they wanted to do it, we wanted to make sure we could provide a safe environment for them to do it in.”

Brandsasse said the organizers did not contact police beforehand — police learned of it through “intelligence information we had through open sources,” Brandsasse said — but they did communicate with officers on the scene as soon as they arrived.

“We anticipated that there could have been some intent to be very visible,” Brandsasse said. “We had contingency plans. We were comfortable with the location, time of day, things of that nature. We were going to work with them.”

Brandsasse said he had coordinated with the fire chief and stationed an officer in the communications center, so the dispatchers would have the most up-to-date information on where the protestors were so ambulances and fire trucks could be re-routed, if necessary.

“I feel as though public safety had the opportunity tonight to build bridges with the community,” he said.

The march ended with a gathering on the sidewalk in front of Baron’s Pub on Main Street. There, Epps, Golden and others spoke about the importance of the protest.

Though the march was small in size compared to protests in larger cities, Epps said the protest showed a community that wants to make a change.

For the days ahead, Riddick says there are several initiatives in the works.

“We have several marches, symposiums and demonstrations planned for the next 90 days,” he said.

‘The headline is forgiveness’

Less than nine months after being injured in a terrorist attack in Jerusalem, Marike Veldman has already extended forgiveness to... read more