‘The headline is forgiveness’

Less than nine months after being injured in a terrorist attack in Jerusalem, Marike Veldman has already extended forgiveness to the man who stabbed her multiple times.

“Honestly, it had not occurred to me to hate,” she said. “I had been so grateful I’m still alive.” 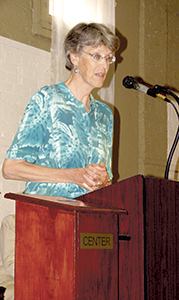 Marike Veldman speaks at Suffolk Christian Fellowship Ministries on Saturday during the Women’s Day Service. Veldman survived a terrorist attack in Jerusalem about nine months ago and now testifies about her experience.

Veldman spoke to about 40 people in Suffolk Saturday during the Women’s Day service at Suffolk Christian Fellowship Ministry on East Washington Street. Her daughter, Majdah Schiavi, lives in Suffolk and works for the Coalition Against Poverty in Suffolk.

Through her work with CAPS, Schiavi knows Lorna Slaughter, who with her husband Ralph are pastors of Suffolk Christian Fellowship Ministry and run a food pantry and other programs through the church.

Veldman, 69, is a native of the Netherlands who moved to Jerusalem more than three decades ago to start a foster home for Arab children. She had no spouse and not a penny to her name, but her venture was successful. Over the years, she has cared for about 20 children of Arab and Christian backgrounds.

Some were with her for shorter periods of time. Others, like Schiavi, came to her home as infants and lived there until adulthood.

The attack happened on Oct. 13, 2015, after Veldman boarded the Line 78 bus in Jerusalem to return from a doctor’s appointment.

Shortly after she boarded, two Arab men near the front of the bus stood up, yelled and started attacking passengers. One had a knife and began stabbing Veldman, injuring her in the chest, shoulders and hands.

She protected herself with her hands and called upon the name of the Lord, said Veldman, who is a Christian.

“I called on His name, and He saved my life,” she said.

The other attacker had a gun and moved to the back of the bus and started shooting.

“I heard gunshots and the blood-curdling screams of passengers,” Veldman said.

Suddenly, the stabber moved away from Veldman, and the glass exit door near her was shot open. But she was afraid to move.

“I was terrified the terrorists would see I was still alive and would shoot me,” she said.

Eventually, she grabbed her bag — it had her identification, and she was afraid to pass out on the street without a way her children could be contacted — and escaped.

She started walking down the street, clutching her wounds and looking for help. She saw a couple of young men who called to her from their car and said they would take her to the hospital. But then she realized they were laughing and mocking her.

Almost at the same moment, a Jewish woman who had also been on the bus grabbed her and ushered her into the vehicle of a kind Jewish man. He said he would take them to the hospital, called an ambulance and removed his shirt and pressed it onto Veldman’s wounds.

The ambulance met them and strapped Veldman onto a gurney. The Jewish woman realized she was unhurt and not far from home, so she walked.

“Then we went at breakneck speed toward the hospital,” Veldman said. “The pain was unbearable, and I could hardly breathe.”

After she arrived at Hadassah University Medical Hospital, Veldman learned she had a collapsed lung. Several of her children were already there when she came out of surgery.

One of the first questions her children of Arab heritage asked her was if she hated them. Veldman was shocked.

“I was so thankful I got out of that bus alive, it hadn’t crossed my mind once that I would hate Arabs,” she said.

She said she forgave her attacker immediately. She quoted Ephesians 4:32: “Be kind and compassionate to one another, forgiving each other, just as in Christ God forgave you.”

“Once you make the choice, God gives you the grace to do it,” she said.

Veldman was able to make that choice even as her attacker was not very far away — he had been injured in the attack and was hospitalized on the same unit.

“That was very scary for me, but I knew he was being monitored by the police,” she said. Several other people died or were injured in the attack, and the attackers are serving life sentences.

After she got out of the hospital after six days, Veldman began sharing her testimony.

“It opened great opportunities for me to testify about Jesus in a very hostile place,” she said. “We have to look for opportunities after something bad happens to us.”

Even so, she declined most media interviews after getting poor response to her message of forgiveness, which Schiavi said is not as accepted there as it is here.

“I owe my survival to the living God, and most people don’t want to hear that,” Veldman said. “The headline is forgiveness.”

“I asked her, ‘Do you think it was an angel?’” Veldman said. “With God, anything is possible.”

She said she also believes God has a plan for her life, even now that her many years of service in foster care have concluded.

For a while after the attack, Veldman used donations to take a cab whenever she needed to go somewhere. But then one day, she saw a Line 78 bus coming toward her, and she knew what she had to do.

“I went into the bus, paid, and sat in the place of the attacker,” she said. “I felt peace.”

A lifetime member of the Driver Volunteer Fire Department, who also designed the building the department now occupies, has died.... read more