Jones to swing alongside pros

Many golfers dream of playing alongside renowned professionals at a historic golf course. Gerry Jones Jr. will get that opportunity at the age of 15.

Jones was selected to play in the Nature Valley First Tee Open at Pebble Beach. Eighty-one golfers aged 14-18 were chosen by judges to compete alongside 81 PGA Tour players and 162 amateurs. 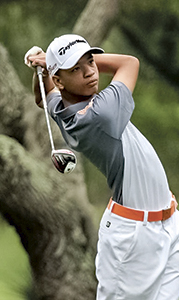 Gerry Jones Jr. participates in a The First Tee event. The 15-year-old was recently chosen to compete alongside PGA Tour members and amateurs at the legendary Pebble Beach golf course during the Nature Valley First Tee Open in September.

Jones, who will represent the Hampton Roads chapter of The First Tee, said the selection is a great feeling.

“It’s a true honor,” Jones said. “It still hasn’t sunken in yet that I’ll be playing with PGA champions.”

Nancy Moore, director of operations and development at The First Tee of Hampton Roads, said being selected for the tournament is the pinnacle of success in the organization.

“It’s the cream of the crop when it comes to playing with The First Tee,” she said.

A panel of judges chose the participants based on golfing skill and their embodiment of The First Tee’s core values.

Moore said Jones’ skill and personal achievements made him an obvious choice for the tournament.

“He is an exceptional young man with great values,” she said. “We couldn’t think of a better representative.”

Jones attended classes and lessons at The First Tee for years, moving up from the lowest division, Pre-Par, all the way to Eagle, the highest. Now, he works with them as a volunteer coach, helping younger players learn the game of golf.

“I feel like I should give back by teaching the younger players what I know,” he said.

Moore said his capacity as a volunteer has cemented him as a leader at The First Tee.

“He’s gone from being a participant to being a mentor,” Moore said.

Jones has cemented his legacy in the golf community through other means as well.

Last year, Jones organized a golf-a-thon through American Junior Golfer Association’s Leadership Links program to raise money for The First Tee of Hampton Roads. Jones played 50 holes of golf over the course of a day to raise money.

“I wanted to do something for the community, and The First Tee is one of the most worthy causes out there.”

Jones said he plans to make the fundraiser an annual event. The next one will take place on Aug. 26.

Moore said Jones’ initiative and dedication to The First Tee made him the perfect candidate to nominate to go to the tournament.

The Open will take place Sept. 13-18. It will be televised nationwide on the Golf Channel.

Jones is no stranger to playing on the national stage. He has played in several junior golf championships and competed nationally. However, this tournament will be for a cause that is closer to home.

“The First Tee has been great, because they teach you skills that apply to life,” he said.

Before the tournament actually begins, the junior golfers are paired with their professional counterparts in a pairing party.

“If I had to choose, I would like to be paired with Bernhard Langer or Lanny Wadkins,” he said. “I can’t believe that I’ll be there playing with legends.”

Regardless of the golfer Jones is paired with, it will prove to be a great experience for him.

“When you’re a young golfer, it’s your dream to play at Pebble Beach,” Moore said. “It’s kind of the ultimate reward. We’re just happy we could be a part of this amazing young man’s journey.”