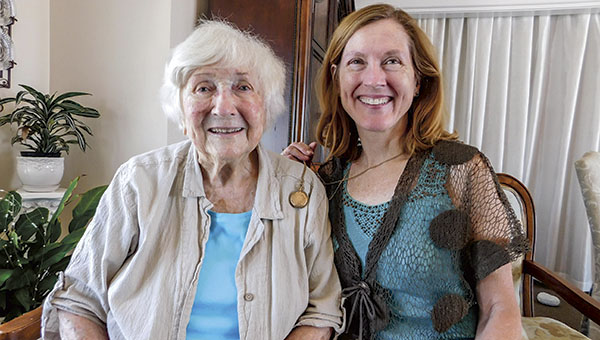 Louise Musante-Ives and her daughter, Catherine, visit the home where Louise spent part of her childhood with her aunt, Louise Obici, and uncle, Amedeo Obici, the founder of Planters Peanuts.

In her youth, Louise Musante-Ives recalls rolling down the hill in the backyard of her uncle’s house with her friends.

“We got so many grass stains in our clothes,” Musante-Ives said with a light chuckle.

Now, more than 80 years later, she stares out the window overlooking the same hill that is now the 18th hole of the Sleepy Hole Park golf course.

The Obici House, perched in the back of the golf course, was home to Musante-Ives’ uncle Amedeo and aunt Louise Obici. Amedeo was the founder of Planters Peanuts, which he eventually headquartered in downtown Suffolk.

Planters was birthed in the town of Wilkes-Barre, Pa., in 1906. Seven years later, Obici opened a processing plant in Suffolk to be close to the peanut processors that supplied his snack company.

Musante-Ives is proud of what her uncle accomplished with Planters.

He put Suffolk on the map, she said.

Obici purchased Bay Point Dairy Farms and moved the farmhouse, formerly in a different location on the farm, in the early 1920s. He conducted extensive renovations and expansions to it to make the structure known today.

In 1927, Musante-Ives’ older sister was killed in a trolley car accident. She was eventually sent to Virginia to stay with her aunt and uncle after her mother experienced a mental breakdown from the tragic incident. She stayed there until 1931, when she moved back in with her mother in Wilkes-Barre.

Musante-Ives continued to visit during the summer and holidays until the early 1940s. By 1947, her uncle Amedeo and aunt Louise had passed away. The property was then handed over to Amedeo’s business partner, Mario Peruzzi.

During the next two decades, the property exchanged hands with several private owners before it was claimed by the city of Portsmouth in the 1970s.

Musante-Ives visited the house once again in the 1980s — the first time she had done so since her uncle’s funeral in 1947. She said the reason for the hiatus was her fear of the condition the house might be in.

“I thought the house had fallen down. I refused to come here, because I could not have stood to see it in shambles,” she stated in a Virginian-Pilot article from that period.

At the time, the house was intact and in good condition. But in the years to follow, the house began deteriorating.

Local builder Ronnie Rountree, who leases Sleepy Hole Golf Course from the city, stepped in to begin full renovations. Originally, he was hesitant in heading the project.

“It was a wreck and rotten throughout,” Rountree said.

Renovations began in June of 2010 and concluded two years later in December. The project cost more than $3 million.

Rountree and his team tried to maintain the authenticity of the original home. Most of the doors are original, as are the fireplaces, light fixtures and some of the flooring, molding and front porch features. Also, the roof was constructed to resemble the original one.

However, some of the floors and ceilings were so rotten they had to be replaced altogether.

The basement has also been converted to a pro shop, grill and clubhouse.

Both Musante-Ives and her eldest daughter, Catherine, appreciate the new renovations and restorations.

“This was definitely a labor of love,” Catherine said.

“I appreciate how they were able to preserve the flavor and hospitality,” Musante-Ives said.

Musante-Ives has been a rare visitor to the Suffolk home where she spent so many years and created so many memories, but she still has a treasured keepsake from her Aunt Louise.

Louise had received a rose gold pocket watch engraved in cursive with her name and birth year.

When Musante-Ives was born, her father named her after his sister, Louise, who eventually gave her watch to her namesake.

Musante-Ives kept her aunt’s name alive by giving her eldest daughter, Stephanie, the middle name Louise, also passing along the watch to her.

The tradition continues, as Stephanie’s niece was named Louise, as well. Stephanie plans to give her the family heirloom in due time.

Perhaps someday, that Louise will also visit the place in Suffolk that still bears the name of couple that started it all.