All-stars to swim at Marlin Club 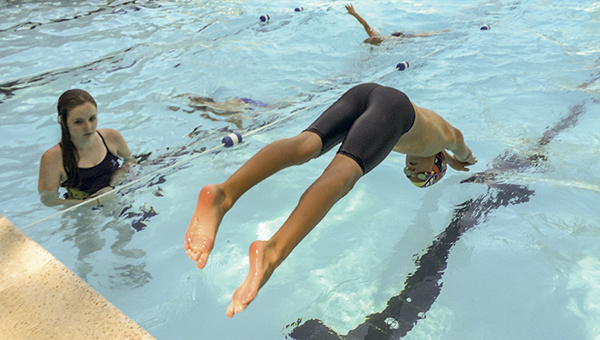 Luke Geabhart dives in to practice for the Western Tidewater Swim Association all-star meet on Saturday. Geabhart will be swimming the 50-meter freestyle and freestyle relay events for Marlin Club.

The summer swim season will reach its pinnacle this Saturday with the Western Tidewater Swim Association all-star meet at Marlin Club.

Young swimmers from all over the area will participate in more than 60 events. Participants will range from 5 to 18 years old. Experienced competitors and newcomers alike will compete to take part in the meet.

Coaches from various teams agreed that being an all-star is something to be proud of.

“I hope it’s going to be a neat experience for them,” said Mark Keating, coach at Nansemond Swim Club.

Emily Salpeter, the head coach for Team Barracuda, said being an all star is a big deal for her swimmers.

“They’ve accomplished something, being an all star,” she said. “A lot of them haven’t made it before, and they’re pretty excited.”

Swimmers for the meet are chosen based on their top times in their events. The fastest swimmer on each team for each event is sent to the all-star meet.

However, swimmers are only allowed to swim two individual races and one relay at the meet, meaning teams have to take swimmers who may not be the best in their events.

Each team will send around 30 swimmers to the meet to swim in more than 60 events.

Keating said the difficulties that come with all-star selection may have a detrimental effect on the team.

He said a shortage of swimmers forces him to have younger athletes compete in age groups that they are not old enough for. This, he said, is a common problem for smaller swim teams.

Though the dearth of players may cause issues for the teams, it gives a chance for younger players to have their first experience at an all-star meet.

“We have some young people who are there for the first time,” Salpeter said. “They’re definitely growing into talented swimmers.”

Madi Wilson, an assistant coach at Marlin Club, said the younger swimmers are happily anticipating their first appearance at an all-star event.

“It’s really exciting for most of the younger kids,” she said. “A lot of them haven’t qualified before.”

Though she will not be able to attend the actual event, Wilson, who attends Nansemond-Suffolk Academy, says she and others look forward to facing off against familiar faces from the high school season.

“It’s good for the older kids, because they’ll see people they’ll swim against during the season,” she said.

Wilson won’t be competing, but she is helping coach the team that will participate at the meet. In addition, she and others are setting up for the meet, which requires more effort to put together than the other, smaller meets. Marlin Club has to set up the lanes for events, set aside spaces for each team, and more.

“It requires a lot of setup,” she said.

The meet will be a chance for swimmers to show off their skills and hopefully win the meet for their team. Most of the coaches agreed that the meet could be close between the teams, but it will be good to interact with teammates and friends.

EDITORIAL Educators make lots of noise around this time of year about “summer learning loss,” the brain drain that happens... read more