Indy race to be named after local man 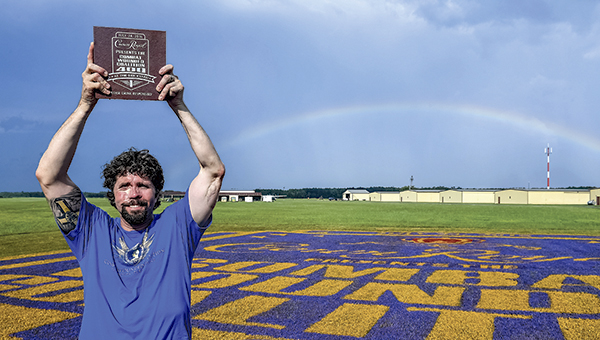 Jason Redman celebrates after being named the winner of Crown Royal’s “Your Hero’s Name Here” competition during his 100th skydiving jump at Skydive Suffolk. (Photo by Larry French/Getty Images for Crown Royal)

When drivers start their engines at the Brickyard 400, citizens of Hampton Roads will have a chance to celebrate a hero close to home.

Crown Royal held a contest to name the race at Indianapolis Motor Speedway after a deserving first responder or military member.

The honor went to Chesapeake’s Jason Redman, who learned he had won the “Your Hero’s Name Here Contest” on June 6.

“It feels amazing,” Redman said. “It’s truly incredible. All the finalists are doing amazing things, so I didn’t know if I could win.”

Redman was at Skydive Suffolk completing his 100th jump when the news was announced. Usually, he said, the 100th jump is cause for celebration, but he had no idea what was in store for him.

The emblem of the Brickyard 400 was displayed on the landing area for Redman’s jump. Once he got below the clouds, around 3,000 feet, he saw the bright blue and gold logo and realized he had won.

“It was just awesome,” he said. “I was hooting and hollering when I saw it.”

Instead of naming the race after himself, Redman decided to have the race officially named for the Combat Wounded Coalition, the nonprofit he founded.

The official name of the event, which takes place July 24, will be “Crown Royal Presents the Combat Wounded Coalition 400 at the Brickyard.”

When he landed, he was presented with a $10,000 check to the Combat Wounded Coalition from Crown Royal.

The Combat Wounded Coalition began as a program called Wounded Wear, which provided wounded soldiers with clothing kits and modified garments to fit people who were wounded in battle. Over time, the group evolved. The Combat Wounded Coalition still offers specialized clothing for the wounded, but is now involved with multiple programs to bring education, employment, housing and support for those injured in combat.

Though the coalition has been a success — Redman said they have served over 5,000 veterans — he said they need help to make the next step.

“We need dollars to manage the larger growth and engage in more programs,” he said. “People have to be aware of what we’re doing. The national exposure that comes with the race is perfect for us.”

Redman served as a Navy SEAL for a combined 21 years. He was deployed five times, including two combat deployments.

In 2007, Redman was injured in combat, with bullet wounds to the face and left arm. He required 37 surgeries to recover.

Despite receiving many awards for his service, Redman says winning this contest was one of his greatest accomplishments.

“It’s pretty darn surreal,” he said. “It’s definitely one of the top events of my life.”

Redman will get a chance to go down into the pits and meet with the drivers in a special VIP experience. He will also present the trophy to the winner of the race.

Redman said he is looking forward to seeing the NASCAR champions up close. He said he hopes to meet Dale Earnhardt Jr., one of his favorite drivers.

Redman said the experience as a whole has been unforgettable. But even though he won the contest, he credits others with helping him reach the victory.