Leland Edwin Beale Jr., 91, passed away with his loving family by his side on July 13, 2016. Born in Isle of Wight County on the Lawrence Farm on March 11, 1925, he was the son of the late Leland Edwin Beale Sr. and Ruby Beaton Beale. He was predeceased by a brother, Theo Elliot Beale, and wives, Mildred Irving Lea Beale and Jane Ellen Humphrey Beale, and a daughter, Elizabeth Carolyn Beale. 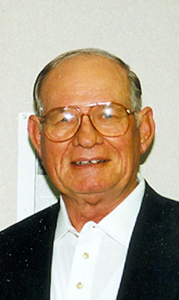 In 1942, Leland graduated from Franklin High School as vice president of his senior class and enrolled in Virginia Polytechnic Institute in the Cadet Corps Infantry Company C. That same year, Leland joined the United States Navy at age 17. Called to serve, Leland reported to the University of North Carolina. He completed officers’ training at Northwestern University and served as a Commissioned Ensign in 1945. One year later, Leland served on the LSMR528 as a first lieutenant. After graduating from V.P.I. with a Bachelor of Science in Business Administration in March of 1948, Leland accepted a position with the U.S. Department of Agriculture in Courtland. He was promoted to District Director of the Agricultural Stabilization Conservation Service in the U.S. Department of Agriculture within one year. He was appointed as state executive director for the USDA in 1976. After Leland retired in 1981, he was charter president of the Black Creek-Burdette Ruritan Club, vice chairman for the Department of Agriculture and Consumer Services appointed by Governor Robb, chairman for the Horsley Conservation District, chairman for the Cypress Cove Country Club and president for Citizens for Responsible Government. Leland attended Black Creek Baptist Church and more recently, Franklin Congregational Christian Church. As a member of Black Creek, he played the piano for church services and Sunday school, spent three years as treasurer, and five years as superintendent of Sunday school.

Visitation will be from 4 to 6 p.m. on Sunday, July 17, at Wright Funeral Home, 206 W. Fourth Ave., Franklin. A funeral will be held on Monday, July 18, at 2 p.m. at Franklin Congregational Christian Church, 412 N. High St., Franklin, with the Rev. James H. Hyatt Jr. officiating. Burial with military honors will follow at Poplar Spring Cemetery. A reception will follow the service at Cypress Cove Country Club. The family would like to extend a special thanks to the loving caretakers who took care of Mr. Beale these past few months. In lieu of flowers, the family requests donations be made to the American Cancer Society or a charity of your choice. www.wrightfuneralhome.org.