New toilets can make all the difference on the water bill — especially when you have about 500 toilets. 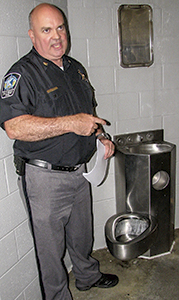 Western Tidewater Regional Jail Superintendent shows off a new toilet in a maximum-security area at the jail, which has made energy-saving upgrades lately.

The toilets, which are electronically controlled to limit the number of times inmates can flush them, are only one part of the energy-saving improvements recently completed at the Western Tidewater Regional Jail.

However, they have produced the most dramatic savings so far.

The improvements at the jail cost about $4.7 million altogether, but through a state program, taxpayers won’t be impacted.

The energy performance contracting program allows public facilities to contract with pre-approved vendors to make energy-saving improvements. The vendor guarantees the energy savings will cover the debt service on the loan, or else it writes a check for the difference.

“We feel like it’s a win-win, not only for the jail but for taxpayers also,” said Rex Alphin, a member of the jail board and of the Isle of Wight County Board of Supervisors.

The jail houses about 675 inmates from Suffolk, Franklin and Isle of Wight County.

Before the improvements were made, inmates sometimes would stuff their uniforms or trash into the toilet and flush it numerous times to make it overflow, Smith said. It happened a couple of times a week or so.

“It’s a health problem, and it’s a security problem,” he said.

As part of the energy-saving program, new toilets were installed that flush with an electronic button rather than a manual lever. Now, inmates can flush the toilet only twice every 30 minutes.

The sinks in inmate housing areas run for only 15 seconds and then cut off until the button is pressed again, ensuring they also aren’t likely to overflow.

Both the toilets and sinks can be controlled from a central location in the jail. Staff can cut off all the water to a cell, just the toilet or just the sink.

“I think we’ve probably had to cut off water in a cell maybe once” since the changes took place, Smith said. “We can control it down to the nth degree.”

In the inmate shower area, the controls were upgraded to electronic controls for similar reasons. Inmates used to push the button and jam it closed, allowing the water to flow until a staff member noticed it.

Worse, inmates could obtain a weapon if they took the fixture apart and got to the long metal bar behind the wall. Now, that is no longer possible.

Water fixtures in staff areas and the lobby have been upgraded to low-flow devices.

Almost no area of the jail went untouched by the improvements. The boilers, water heaters and pumps were all replaced. In the kitchen, exhaust hoods and the fire suppression system were upgraded. Dryers were replaced in the laundry room. Controls on the heating and air conditioning system were upgraded, and the system was balanced so that every area in the building heats equally.

Lighting inside and outside was upgraded, and the roof was resurfaced with white material so it traps less heat.

“I was very impressed,” Suffolk City Councilman and jail board member Lue Ward said after the tour conducted Wednesday for board members and the media.

Suffolk City Councilman and jail board member Mike Duman said he hopes the results can be replicated for the city and the school system, which are currently beginning the process of an energy performance contract.

“As successful as this appears to be, I’m hopeful the continuing process within the city and the schools comes to fruition,” he said.

Representatives from Siemens, which did the improvements for the jail, said it appears to be working.

“Everything went as we planned it would go,” said Jeremy Vlajic, a service account engineer.

John Keeton, an energy engineer, said he will check in with the jail frequently to make sure there are no problems.

“Part of the partnership is at the end of every year we have to make sure the savings are there,” he said, adding he is in contact several times throughout the year as well.

Separately from the energy performance contract project, the jail is refurbishing its inmate recreation areas using money from the commissary, where inmates can purchase snacks and hygiene items. By law, that money must be used for inmate education or recreation.

Two of the areas are already done, two are in process and one is in the pipeline, Smith said.

Also in the building and separate from the energy-saving project, several security upgrades have recently been made at the magistrate’s office.

“It’s been a tremendous change in the security, safety and public service,” said Sean Dolan, chief magistrate for the fifth judicial district.

People who came to the magistrate’s office used to have to explain their issue in an open seating area to staff on the other side of protective glass, Dolan said. It was hard to hear them, and magistrates often came out into the seating area to serve citizens.

The office handles delicate situations like mental health processes, protective orders and misdemeanor warrants. So citizens can now explain their issue in a private room, talking to a staff member who is still on the other side of the glass. The communications system has been upgraded, so it is much easier to hear them.

The office also now has a way to keep people safe from people who may mean them harm, such as a woman seeking a protective order from her abuser, who sometimes shows up at the office while she’s there.

“We’ve had women hide in the bathroom,” Dolan said. Victims can now be sheltered in a separate room.

Safety upgrades for the staff include a separate exit door and a duress button that’s connected directly to Suffolk 911. Cameras in the building off Godwin Boulevard also can be seen by emergency dispatchers on Market Street.

Lacey Lyle, a physician assistant with Neurology Associates, will be the guest speaker during a Parkinson’s disease support group at... read more