The journey from heart surgery to bodybuilder

Amos “Jay” Riddick, Jr., won second place in the men’s physique competition at The Colonial Open, a national qualifier for the Organization of Competitive Bodybuilding.

The Colonial Open, which was held in Yorktown on July 9, was Riddick’s first foray into competitive bodybuilding. He had not expected to do so well in his first competition. 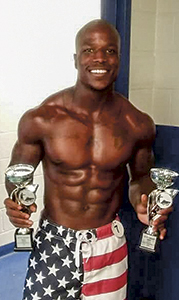 Amos Riddick shows off his awards from The Colonial Open.

“The idea was to go in just to compete,” Riddick said. “But to place that high against some great athletes was a great feeling.”

Riddick achieved second place in the Men’s Physique Open A Class, finishing only one point behind the winner, Johnathan Philbert.

Riddick will be participating in other bodybuilding competitions, hoping to get a professional certification.

Top-placed competitors in national qualifiers can get their “pro cards” from the International Federation of BodyBuilders. Riddick said he hopes to qualify for the IFBB pro card at his next competition.

When one looks at Riddick, it is hardly a surprise that he competes as a bodybuilder. However, he was not always at the peak of physical fitness.

“I was born premature and I needed open-heart surgery when I was a child,” he said. “The doctors said I wouldn’t be able to run or do sports.”

Despite the physical limitations brought on by his surgery, Riddick decided six years ago to begin taking fitness seriously, starting the journey that brought him to where he is now.

“I wanted to prove the doctors wrong,” he said. “I wanted to see how strong my heart was.”

Riddick pushed himself to the limits on his fitness journey. He said he runs 25 miles every other day, on top of weight training and working as a physical trainer.

Six months ago, Riddick founded his own business as a personal trainer. Raw Fitness offers training programs for people of all ages and body types, with an emphasis on natural fitness.

Riddick said he refuses to use nutritional supplements or fad diets in his training or programs.

“People these days are trying to get a quick fix,” he said, “but you can’t get fit without hard work.”

Riddick said he hopes his success will be inspiring to those with medical disabilities like his. He said he plans to return to the hospital where his surgery was done to speak to children with similar heart problems.

“I’m trying to represent people with disabilities and those people who have had open heart surgery,” he said.

So how does one transform into a bodybuilder like Riddick? He said the key part is just getting started.

“It’s going to hurt at first,” he said, “but, eventually, your body will change and your mindset will change. Then you can turn the habit of fitness into a lifestyle.”