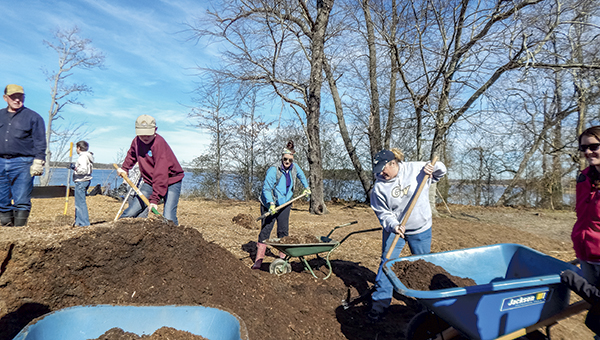 Volunteers plant trees and spread mulch at Sleepy Hole Park during a January volunteer project. Volunteers are needed again next weekend for a project at the same location.

Sleepy Hole Park will get another facelift later this month.

On July 23, the Nansemond River Preservation Alliance will conduct another preservation project onsite. The project entails enhancing the 100-foot buffer area adjacent to the new pier.

“This will help protect waterways and enhance vegetation,” said Elizabeth Taraski, president of the alliance.

The organization partnered with the city on a similar project in January.

For that project, vegetation was planted in the area adjacent to the park’s kayak launch point. Volunteers spread mulch and then planted more than 180 native trees and shrubs in the space.

The space serves as a buffer, slowing runoff water and allowing it to be filtered through the plant and tree roots, Taraski stated in an email.

She added the vegetated buffer also will help prevent erosion, because it will help protect the ground surface from rain impact.

Mike Kelly, parks and recreation planner for the city of Suffolk, said the buffer is essential to the conditions of the Nansemond River.

“When there is just grass present, the water runoff will wash fertilizer and other landscaping chemicals into the river,” Kelly said.

The buffer allows these chemicals to be filtered out before making contact to the waterway.

For the upcoming buffer project, NRPA received a $10,000 grant last month from the Atlantic Coast Pipeline’s community investment program to purchase native trees and shrubs, to install signs and to print educational materials. The mulch will be provided by the city’s park and recreation services.

The application process for the grant was competitive but the NRPA’s application rose to the top, said Bonita Harris, media and community relations manager for Dominion Power.

“We are pleased with the education aspect and the value this project will add to the Suffolk community,” she said.

“The area has a lot of private-owned shorelines,” Kelly said. “So, we hope to educate these owners on how to landscape to support natural buffers.”

The signs, which will be installed in the fall, will explain the purpose of the natural buffer and significance of the park’s wetlands.

The project needs between 10 to 20 volunteers, Taraski said. The January project attracted 85 volunteers due to the heavier workload. This was because volunteers spread the mulch and planted the trees and shrubs within the same day.

Due to the summer heat, the July project will require volunteers only to spread the mulch and prepare the area for fall planting. Tree and shrub planting will take place around November, according to Taraski.

“We appreciate any volunteers,” Kelly said. “We couldn’t do any of this without them.”

As officials prepared for the grand opening this morning of the new Ross Dress for Less store in the Harbour... read more