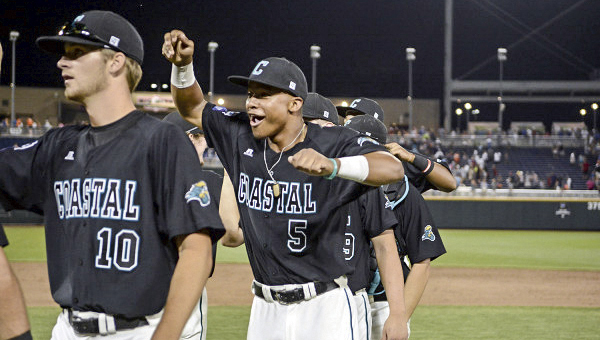 Kieton Rivers(5) celebrates with his Coastal Carolina University teammates after the Chanticleers won Game one of the College World Series in June.

Nansemond River High School won its first baseball state championship in June. Though former two-time All-State performer Kieton Rivers didn’t get a chance to bask in the glory of that celebration, he got much more than a consolation prize as a freshman at Coastal Carolina University, which won its first National Championship in college baseball last month.

“Days have passed, everybody went home and I still don’t think it has sunk in yet,” Rivers said recently. “You see everyone posting pictures on Instagram about winning. It’s starting to sink in a little, but I don’t think it has fully. The season is over with now and everyone’s relaxing, so it’ll probably sink in more soon.”

In the decisive Game Three of the College World Series in Omaha, the Chanticleers held off an Arizona rally, prevailing 4-3.

“The last inning was nerve-wracking,” Rivers said. “When the final out came, everyone ran onto the field and jumped on top of each other.”

That’s when Rivers — who batted .471 during his senior year for the Warriors with a slugging percentage of .912 and on-base percentage of .513 — found himself in a somewhat uncomfortable position.

“I’ll tell you what,” he said. “Being on the bottom of the dogpile is the worst thing ever. Don’t ever do that if you participate in one.”

Bottom of the dogpile aside, the moment of being on the biggest stage in college baseball and winning a championship his first year there was one the Suffolk product will cherish forever.

“It was a great feeling with everybody celebrating and families on the field congratulating,” he recalled. “It’s something you can’t trade for. Honestly, it was probably one of the greatest experiences I’ve ever been a part of. I’ve got souvenirs here at home, so I won’t forget the memories. It’s something I’ll never forget for sure.”

Rivers, a third baseman for the Chanticleers, didn’t start, but he did see considerable playing time throughout his freshman year, ending the season with a batting average of .308, five runs batted in, four hits and three runs scored in 20 games.

“It was definitely a learning experience,” he said.

“People would come home from school when I was in High school, and they would say the transition is very tough from schoolwork, to writing papers to being out on the field all day. I didn’t really understand it until I got to school.”

“It’s something that takes getting used to and I know it took me the whole first semester to get the hang of it,” Rivers added. “The competition is definitely a lot harder, pace of play is different and the speed of the game is a lot faster by far. But it was a good freshman year, and I wouldn’t take it back or trade it for anything.”

One advantage Rivers had over others was seeing his older brothers — Tyren at Radford and Ombri at Virginia Military Institute — play baseball on the collegiate level and then getting to pick their brains.

“Watching them as I grew up and going to my brothers’ college games probably helped me the most,” he said. “They’re role models to me. Everything they’ve done and taught me is coming into play now.”

Whenever his Coastal Carolina career comes to a halt, Rivers has aspirations of one day playing professionally.

“That’s everybody’s dream, but it only comes true to a few,” he said. “I saw what it takes this year with the hard work put in by the guys who graduated. All those older guys were unbelievable.”

“They preached having that work ethic and a good attitude, so I’m going to try to put that into the next couple of years and see how it goes.”

According to Rivers, Coastal Carolina’s baseball planers will receive their rings when introduced on the field at a home football game next fall.

Suffolk league is bigger than ever By Henry Luzzatto Correspondent   Most people think of Frisbee as casual fun, friends... read more