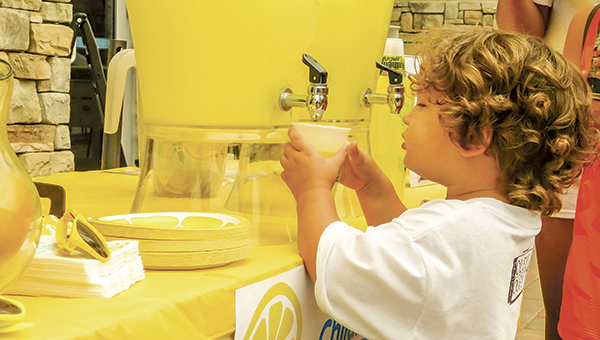 Gideon Thompson, 3, pours a glass of lemonade for a customer at his lemonade stand in Harbour View on Saturday.

Prayer, along with a miracle or two, have been hallmarks of young Gideon Thompson’s life.

The Thompson family had prayed for a second biological child for more than 10 years.

After daughter Brooke was born in 2004, the family added three adopted children, Carrellyn, Alexander and Taylor.

However, the Thompsons still wanted another biological child of their own.

During that time, the family studied the biblical story of Gideon, who faced an army of 135,000 Midianites with only 300 men on his side and miraculously won the battle, overcoming insurmountable odds.

Then, on April 30, 2014, the couple’s prayers were answered when their son was born. Inspired by the study they’d been doing, they named the boy Gideon.

At the time, they had no idea that their son would face his own seemingly unwinnable battle — and soon. Nor did they know that he, like his namesake, would come out on top of that battle.

“Gideon is a miracle,” Jenny Thompson said Saturday at a lemonade stand set up in Harbour View to raise money for Children’s Hospital of the King’s Daughters, which played a key role in Gideon’s story.

At just nine months, Gideon was already walking. But, just two weeks after his first birthday, he lost the ability to walk, and his head began to hang at a tilt.

The Thompsons responded immediately and met with their pediatrician, who referred them to the Children’s Hospital of the King’s Daughters in Norfolk.

The hospital conducted a computerized tomography scan and found a tennis ball-sized tumor on Gideon’s brain. He was diagnosed with Stage Four brain cancer.

Gideon received five surgeries and was held in the intensive care unit for more than a month.

The Thompsons were overwhelmed by the situation, but comfort and prayers from their friends and loved ones kept the family’s faith strong.

“We were praying hard for Gideon,” said Brooke Thompson, 12, Gideon’s sister. “We trusted in God that he would protect him.”

Despite the dire circumstances, the hospital staff was cordial and considerate, said Jenny.

“The CHKD staff became family,” she said. “They always had smiling faces.”

After 31 days in intensive care, the tumor was completely removed and Gideon was moved to the oncology floor. There, he began his first round of chemotherapy.

Even in the midst of treatment, Gideon still managed to be a resilient bundle of joy.

“He was known for running around and climbing IV poles,” his mother said, with a laugh.

Jenny Thompson crafted a book to show a timeline of her son’s medical journey. Turning through the pages, one thing sticks out: Through multiple surgeries and six months of chemotherapy, Gideon was always smiling.

With the help of the hospital staff, Gideon has been cancer-free for just under two years. As a token of their appreciation, the Thompsons hosted the lemonade stand on Saturday to donate back to the hospital’s oncology unit.

The proceeds would exclusively help fund research for the unit.

The atmosphere was buzzing with laughter and conversation, despite the looming rain clouds overhead. The table was decorated with all things yellow — two large plastic dispensers of lemonade and lemon-shaped sugar cookies, all resting on a bright yellow tablecloth.

Soon after the start of the event, it began to rain. The lemonade stand was moved inside the Taste Unlimited store on Harbour View Boulevard.

“When life gives you lemons, you make lemonade,” Jenny Thompson said with a shrug.