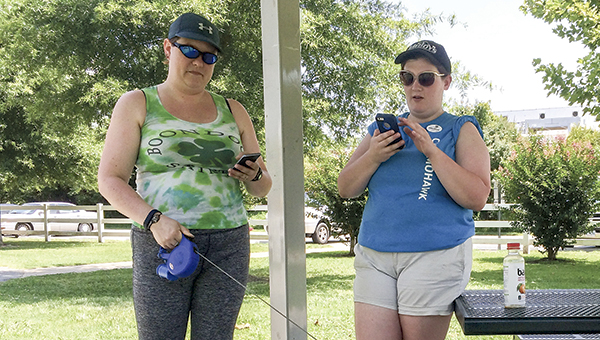 A.J. Birmingham gives her dog some exercise while she and Ashley Edwards hunt for Pokemon at Lake Meade Park.

A cellphone-based Pokemon game may be this summer’s most popular exercise craze.

“Pokemon Go,” the augmented reality game that allows players to catch the fictional creatures in their own neighborhoods, is one of the most popular apps in the world. 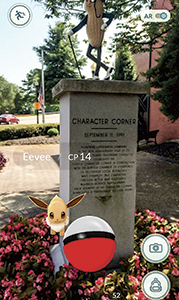 A wild Eevee appears in front of a statue of Mr. Peanut. Pokemon GO projects the creatures onto a real backdrop to give players the feeling they are catching real Pokemon.

Though the reason for its popularity may be the appeal of catching your own Pokemon, the game has earned plaudits for forcing its players to exercise and explore their surroundings.

“I think it’s great that it makes you exercise,” said Brianna Barnes, a 13-year-old student at Nansemond-Suffolk Academy. Barnes walked around her neighborhood, searching for the animated creatures with a friend.

Pokemon Go, a modern take on the popular video games, launched July 6. Since then, it has become one of the most popular cellphone apps ever made.

The game uses your cellphone’s GPS and camera to indicate nearby Pokemon. Players, or “trainers,” attempt to catch as many of the 150 cartoon creatures as possible.

Because the game doesn’t reveal the exact locations of the pokemon, players have to walk to find them, causing them to explore the city and exercise.

Parks and Recreation Director Lakita Watson said she was in favor of the game’s physical nature.

“I think that any opportunity to get people out and about is wonderful,” Watson said. She said the department of parks and recreation will be exploring ways to use the game to promote activity and park attendance.

“I probably wouldn’t come here as much without the game,” she said. “And my dogs like it too, because they get more walks.”

Lake Meade Park is a Pokestop, a place for people to replenish their supply of needed game items, and Coulbourn Park is a gym, where people can battle the Pokemon they catch.

“If you see someone else playing, it’s instant bonding,” she said.

Despite the positive social and physical aspects of the game, there are worries about possible safety hazards.

There have been plenty of stories in the news about people getting injured or robbed while playing the game.

“The Suffolk Police Department is making officers aware of the potential problems and concerns related to gameplay that have been experienced in other locations,” Suffolk spokeswoman Diana Klink stated in an email.

Klink said police advise people to not play while driving, and to not go to unfamiliar places, because of an increased risk of danger.

Ashley Edwards, who was at Lake Meade Park on Friday to catch Pokemon with Birmingham, said one of the best ways to stay safe is to take people with you when you explore the virtual world.

“Going somewhere new is always best in numbers,” she said. “So make sure you bring somebody or do it with a friend.”

Watson said the parks and recreation department wants to find a way to promote safety and use the game to encourage physical fitness.

“I think that if we can do it in a safe way, it’s a great way to promote our parks and our message.”

Folks in need of a job have just the place to go on Friday. That’s the day the Suffolk Redevelopment... read more