Suffolk league is bigger than ever

Most people think of Frisbee as casual fun, friends lazily tossing discs at the park or the beach or on a college quad. 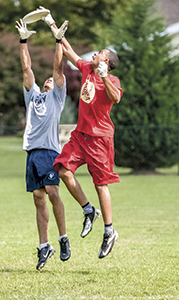 Tillman Rasberry, right attempts to catch the throw during the 2014 summer season of the Suffolk Ultimate League. Registration is now open for the 2016 summer season at www.SuffolkUltimate.com. (Beth Hamilton Photography)

But for Nick Hamilton and his teammates in the Suffolk Ultimate Frisbee league, it’s a sport requiring serious fitness, technique and concentration.

Suffolk Ultimate is in the heat of its third season. The 80-person league includes four teams and pulls players from places as far as Virginia Beach and the Eastern Shore.

Hamilton said the sport is so popular, because it is a great way to exercise and have fun at the same time.

“It’s a great way to get out and run,” he said. “You don’t realize how much exercise you’re getting until the game’s done.”

So what is Ultimate Frisbee?

In this game, players throw the disc to teammates, hoping to score points by getting to the end zone at the end of the field. Players cannot run with the Frisbee, and they have to throw it within 10 seconds of receiving it. If the disc is intercepted or it hits the ground, the other team takes possession.

Hamilton said the unique rules result in a style of play that can be both frantic and fun.

“The disc is constantly changing direction,” he said. “It’s like soccer meets football.”

Currently, the league is in the middle of its season. However, Suffolk Ultimate offers pickup games for players who want an opportunity to hone their skills or get started with the sport.

“We always end up having people who missed the sign-up or hadn’t heard of us but still want to play,” Hamilton said. “Pickup provides the opportunity to come out and play and be active.”

The pickup games are held on Tuesdays at 6:30 p.m. at Nansemond River Baptist and are open to the public.

Lakita Watson, director of parks and recreation, said pickup games and other opportunities to play sports promote physical fitness and are great for the community.

“I think what they’re doing is great,” she said. “Any opportunity to build community through sports and other activities, whether it’s through parks and recreation or not, is a good thing.”

Hamilton said the participation in the league has increased during the three years it has been active. The 80 players who signed up for the current season is the league’s highest player count. However, he said retention was surprisingly low, as many players left for military reasons.

In August, there will be a double-elimination tournament to determine the top team in the league.

Once the season comes to an end, Hamilton said, he and the other players plan to continue the pickup games to have an opportunity to play.

“It’s like an addiction,” he said. “One they start, most Ultimate players can’t get enough.”