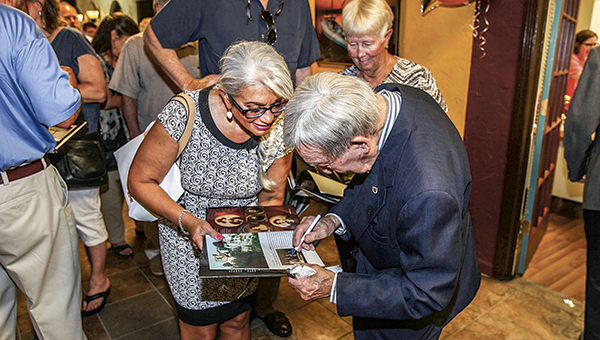 The full-color book chronicles the life and work of musician, former mayor and downtown advocate Andy Damiani, a Richmond native of Corsican heritage who has given Suffolk his all for decades.

“It’s something I’ve wanted to do,” Damiani said last week. “I’m amazed at my own story. I didn’t realize all this happened.” 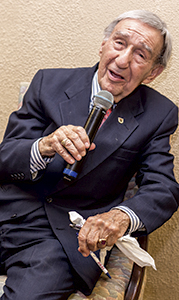 Andy Damiani thanks the many guests who attended the launch party for his new biography, “Damiani Here.” The party was held in the gallery area of his West Washington Street mall on Sunday. (R.E. Spears III/Suffolk News-Herald)

Damiani partnered with writer Phyllis Speidell and photographer John Sheally to put the book together. Even for the talented and experienced publishing team, the project was daunting.

The book discusses Damiani’s family history in Corsica, childhood in Richmond, studies at Juilliard, Army service and European life after the war. It also chronicles his migration to Suffolk, history of public and private service and the donation of his extensive archives to the Virginia Historical Society, which Speidell and Sheally helped coordinate last year.

“We probably could have done another volume or two, and it would have been every bit as interesting,” Speidell said.

The chapters on Damiani’s political career in Suffolk follow the evolution of Suffolk from a sleepy little town nestled in Nansemond County to the sprawling, 430-square-mile, largest Virginia city that it has become.

“No man’s ever loved this city as much as Andy,” Sheally said.

There is an entire chapter on the merger that brought together the former Suffolk and the former Nansemond County to become the new city of Suffolk.

Damiani said he enjoyed putting the book together, because he got to reminisce on his life.

“I was thinking about the places I’ve been, all the countries that I’ve worked in and cities that I’ve worked in,” he said. “That gave me the education that I don’t think I could get at Princeton or Harvard, to tell you the truth. I tell people to travel, move around. Don’t stay in one spot forever. Get out, because the world is wide open.”

Nobody had seen the book before Sunday’s launch — not even Damiani himself.

“We’re keeping it under wraps,” he said.

On Sunday, though, he was sitting in a chair in the corridor of his West Washington Street mall, surrounded by well-wishers, all holding copies of the book awaiting Damiani’s autograph.

Damiani said the book likely isn’t one that can be digested in one sitting.

“It’s one of those things you read and put it aside and go back over it,” he said. “I hope the people will enjoy it.”

“He views this as a gift to the city,” she said.

“Everybody thinks they know Andy,” Sheally said. “Now they’re going to get to really know him.”

“I’ve been privileged and blessed by the Lord,” Damiani said.

The book will sell for $29.95 and will be available from Damiani’s office. Call 539-3399 to get information on purchasing a copy.

Only 1,500 were printed, so get one soon. Speidell said the book may also be available soon in local shops.