Man charged with DUI after crash into building 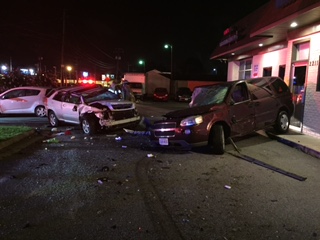 Several vehicles and a building were damaged in a crash on North Main Street early on Sunday morning.

Suffolk police have charged a driver who was involved in a crash early Sunday morning that involved several vehicles and a business.
Keaton Beery, 23, of Chesapeake, was charged with driving under the influence of alcohol, driving without a valid operator’s license and failure to maintain control following the accident, according to Suffolk spokeswoman Diana Klink.
The crash occurred at about 4:46 a.m. in the 2200 block of North Main Street in the parking lot of Mike Duman’s Rental/Collision Center.
An investigation revealed that the vehicle, a Lexus SUV, traveled across the median and ran off the roadway, striking the vehicles and the front door of the business, which sustained minor damage, according to a press release from the city.
Beery was the only occupant of the vehicle, and he was treated for non-life threatening injuries and was transported to a local hospital, where he was treated and released, according to the release.

A fire on Saturday evening destroyed a home on Crittenden Road, displacing a family of five. A home was destroyed... read more