Churchland Swim makes it No. 9 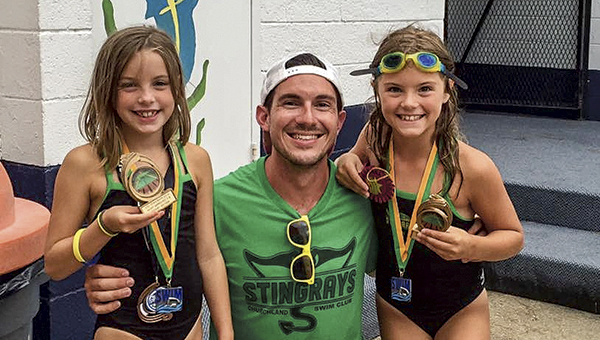 “We were confident, but we weren’t expecting to win by that big a margin,” said Kyle Lippiatt, the coach for Churchland’s all-star team.

Seven teams and hundreds of kids gathered at the Marlin Club on Saturday for the summer swim season’s biggest event. Kids aged 5-18 gathered to participate in more than 60 events.

Each team sent the swimmer with the top time for each event to the all-star meet. However, swimmers are only allowed to swim two solo events and one relay in the meet, which requires teams to take swimmers who might not have the best times in their events.

Lippiatt said the victory was a big accomplishment for his team. He said the team could not take some of its top year-round swimmers, who had to participate in a different meet.

“We had to have more summer-league-only kids, but they took on that role and swam as well as possible,” he said. “I’m very proud of how they did.”

Lippiatt said a key factor in his team’s success is its culture, which combines competition with fun.

“All the kids come to practice every day wanting to swim,” he said. “We try to develop a love for the sport through healthy competition.”

However, he said, the most important part of the team’s mission is improving the swimmers as people.

“The key is building good character,” Lippiatt said. “Everything follows from that.”

The team is young, but Salpeter says it will be a force to contend with in years to come.

“When we have more older kids, we’ll be able to strive to be more competitive,” she said. “A lot of the kids had never been on a swim team before, so third is a great finish.”

Keating had the opposite problem. While Team Barracuda had a young team, the Nansemond Sharks were missing swimmers in the youngest age group.

“We didn’t have anybody that could swim those events,” he said. “You only get points if you have bodies in the water.”

Keating said Nansemond Swim Club hopes to rectify this problem and train younger kids to be able to participate in the meet next year. Despite the problems with the age brackets, Keating said the team did well.

“The results are great, but we’re really in for the fun of it and to have a great experience.”

With the Suffolk teams looking to improve in the coming years, the Churchland Swim Club may have to look out for its competitors. Lippiatt said he and the kids are prepared for the challenge.

“It gets harder every year,” he said. “The pressure is on, because nine in a row is unprecedented. But they know losing is not a big deal. The streak has to end at some point.”

He said keeping a culture of fun at the swim club is the most important thing.

“We want people to love the sport and want to keep coming back,” he said.

The all-star meet offered a chance for the best swimmers in the area to compete against one another. Keating said the stars of the event may go on to even better things in the future.

“I wouldn’t be surprised if you see these guys at the Olympic trials in four years,” he said.

Go have some fun

Editorial It may turn out that the best thing to happen to downtown Suffolk in years is a cellphone video... read more