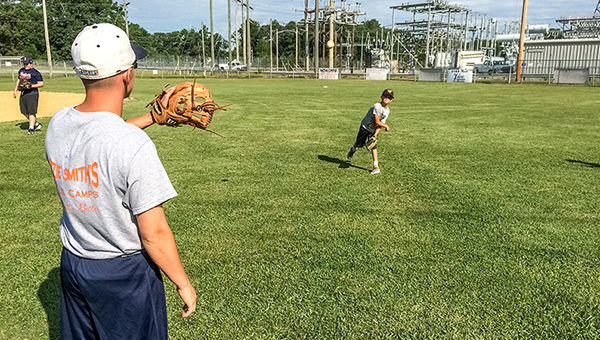 Jason Setliff prepares to catch a throw from Aiden Cobb. Setliff and Cobb spent much of the camp working together to improve Cobb’s throwing technique.

Despite the usual popularity of summer sports, only five players signed up to attend the camp, marking a sharp decline from previous years.

“I don’t know if it’s because they’re burned out or what,” said SYAA Baseball Commissioner Jeff Beale. “These guys finish fall ball, and then they basically go straight into the spring season. After that, there’s all-stars, so it can get hectic.”

This is SYAA’s fourth year offering the camp, named for Hall-of-Fame shortstop Ozzie Smith. In previous years, larger numbers of players attended the camp, including 35 people in 2014 and more than 20 last year.

The camp was offered last month, as well, and had a similarly small turnout.

Two college baseball players work as the camp’s instructors. During the course of the week, they teach the players the fundamentals of the game, as well as tips and tricks to improve their play.

The camp started Monday and goes until Friday. The players meet and warm up at 8:30 a.m., and the day usually concludes around noon.

The signup flyer for the camp advertised it for ages 6-18, but the five who showed up skewed younger in age, with the oldest being 13. Because of this, the instructors had to tailor their program to meet the needs of the younger players.

“We work on fundamentals, mostly,” said Christian Sola, an instructor who plays baseball at Thomas Nelson Community College. “We try to simplify it. A lot of younger kids are visual learners, they can’t just listen and figure out how to do it on their own. They have to see what they’re supposed to do.”

Though the small turnout may be seen as a negative thing, the camp’s instructors said it allows them to focus on the players individually.

“It gives you more of a chance to work one-on-one,” Sola said.

“We’re able to focus on each individual, so the kids get more information and more of an experience,” said Setliff, who plays at Averett University. “Plus, it helps that there are fewer kids to worry about.”

The kids responded well to the individual focus. Sola and Setliff ran group drills to work on correct techniques for outfielders and infielders, but changed their direction to help with different aspects of the player’s game. Nine-year-old Breon Weaver was given special instruction on how to position his body for ground balls in the outfield, while Aiden Cobb received help on his throwing technique.

“I think it’s easier to teach when there are less people,” Cobb said. “There’s less distraction.”

Despite the dwindling turnout at SYAA’s Ozzie Smith camps, Cobb has been present at the last four camps. His mother, Misty Cobb, said she continued to sign Aiden up for the camps, because they felt there was still a lot to be learned.

“It’s great to learn from college players who are still playing ball,” she said. “It’s much more beneficial for them to learn in smaller groups.”

Sola said the camps are also offered in other parts of the state, where turnout can reach over 100 kids. Despite the comparatively small attendance at SYAA, Aiden Cobb said he enjoyed the camp.

National Guard unit returns By Henry Luzzatto Correspondent   There was tension in the air outside of the National Guard... read more