Changes in flight at airport 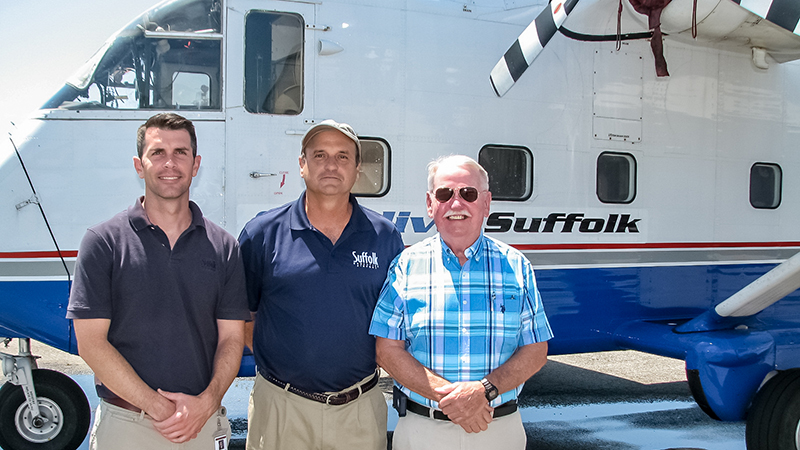 Air, land and sea (well, river) — Suffolk’s got all three.

While most folks visiting Suffolk or returning home arrive by land, a smaller number arrive by air at the Suffolk Executive Airport. But it’s not such a small number that the city hasn’t invested significant resources in making those who arrive at the airport feel welcome.

Some changes are afoot — or in flight — at the airport.

Longtime airport manager Kent Marshall recently retired, handing over the reins to Tim Daniel, who has worked as a technician at the airport for a year and a half.

“I’ll probably be out here two to three times a week,” said Marshall, who still keeps his private plane in a hangar at the airport off Carolina Road. “The only difference will be I don’t get paid, and I can go home when I want.”

Daniel has Marshall’s hearty endorsement as the new airport manager.

Daniel retired from the U.S. Air Force after nearly 25 years of service. He spent a few years as a corporate pilot but didn’t like it.

The Suffolk Executive Airport was a natural choice for the next step in his aviation career, for proximity’s sake if nothing else.

“I can stand in my driveway and see the beacon,” he said.

But Daniel didn’t take the job just because of the relatively short commute. He’s interested in not only maintaining a safe and effective operation but also aiding the city’s economic development.

“We try to put forth the best image we can for the city,” Daniel said. “We try to improve the industrial base by attracting corporate customers.”

Existing companies with a presence in Suffolk — companies like Target, the J.M. Smucker Co., BASF, Belk, the Department of Defense and more — land their corporate jets at the airport frequently, Hughes said. The city also frequently welcomes economic development prospects through the airport, he added.

Keeping the airport looking its best takes a lot of time. Two people, including Daniel, work at the airport full-time, and two work part-time. One seasonal employee helps keep the grass cut on the airport’s 744 acres, about half of which needs to be mowed.

Other projects are more long-term. A contractor is hoping to wrap up construction soon on the airport’s parallel taxiway, which will mean pilots no longer have to taxi on the runway.

Fred Ekstrom, an FAA inspector through the contracted firm of Talbert and Bright, said the project should be done within a month, weather permitting.

“We’ve had a lot of rainy days that held us up tremendously,” he said. “But it’s a pretty exciting project with quite an advancement of the airport’s ability.”

A terminal redesign and remodel was completed a couple of years ago, and other projects coming up include a redesign of the entrance and parking area.

The airport monitors an average of 30 to 35 aircraft movements — takeoffs and landings — a day. Some days, especially when Skydive Suffolk is booked, have many more. Rainy, cloudy days have zero, or close to it.

“Everything in aviation is very weather-dependent,” Daniel said.

To feed all those hungry mouths on the good days, the airport needs a restaurant, and it has struggled to keep an operator in place in recent years.

However, Hughes said the city has identified a restaurant operator through a recent request for proposal process and hopes to have the new restaurateur approved and operational soon.