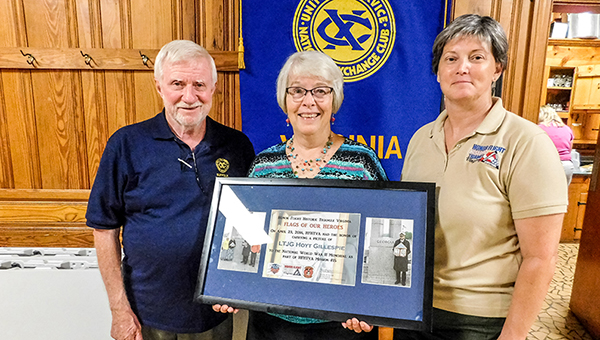 From left, Suffolk Exchange Club members Bob Moore and Caroline Grube are joined by HFTVA coordinator Martha Kastler during a recent Exchange Club meeting. Grube holds a glass plaque received through the Flags of Our Fathers program. The plaque commemorates her father and uncle, who were both World War II veterans.

A program that honors veterans by reconnecting them to the memories of their time in service received a boost from a community organization on Monday.

The Suffolk Exchange Club hosted Martha Kastler, coordinator for the Flags of Our Heroes program — an initiative through Honor Flight — during its monthly meeting at Berea Christian Church.

At the conclusion of Kastler’s presentation, the club donated $300 toward the programs.

Kastler told members and veterans in attendance about the history of the two programs, noting they help “lift the veterans up.”

In 2005, Earl Morse and Jeff Miller wanted to provide aging veterans the opportunity to see all major war memorials in the nation’s capital, so they created the Honor Flight program.

“Honor Flight provides — at no cost to the veteran — the opportunity to see the memorials the American people have built,” Rep. Jeff Miller (R-Fla.) said in a video on the national Honor Flight webpage. “There is no better organization out there today that can provide something to somebody for nothing.”

Since its birth, Honor Flight’s 143 hubs nationwide have sent more than 180,000 veterans to Washington, D.C. Veterans are also taken to other memorials plotted across the country.

The Honor Flight Triangle Virginia hub was founded in October 2008 and accommodates veterans from Hampton Roads and Richmond. More than 1,200 veterans have been part of the hub’s Honor Flight program.

Hub director Matthew Hartman said Tuesday he hadn’t expected the Honor Flight program to last for as long as it has.

“This is well beyond anything I ever imagined,” he said.

The hub hosts Honor Flights twice a year, in April and October. Veterans get to visit the National Museum of the Marine Corps, the Korean War Veterans Memorial and the World War II Memorial, among others.

The day begins at 4:30 a.m. as more than 90 veterans, their guardians and some family members of deceased vets travel by charter bus from Virginia Beach to Washington. Police escort the buses for the duration of the trip.

The first stop is the Marine Corps Museum in Quantico. Then the group visits war memorials in Washington.

During their time in the city, those families of deceased veterans that have applied for the Flags of Our Heroes program are sent to either the Korean War or World War II memorials, where the fallen heroes are honored.

Families can send photographs of deceased veterans prior to an Honor Flight. The day of the flight, families are provided glass plaques containing the service member’s photo, a memorial flag and a flag pin. They can then take photos with the cases at either memorial site.

“This is a very emotional ceremony — it brings a lot of tears,” Kastler said.

Caroline Grube, a Suffolk Exchange Club member, participated in one such ceremony with her siblings and a family friend a few years back. Her father, Lt. Hoyt Gillespie, and her uncle, Sgt. Donald Gillespie, were both honored for serving in World War II.

The experience seems to get veterans talking to one another and to anyone else willing to lend an ear, participants said.

“Once you get the veterans talking, you listen,” said Bob Moore, who has volunteered twice as an Honor Flight guardian. “Truth is stranger than fiction. Some of their experiences were unbelievable.”

Hartman said the veterans herald Honor Flights as one of the best experiences of their lives.

“Almost all veterans say that this is the most important day of their lives, besides their wedding day and the birth of their children,” Hartman said.

As officials prepared for the grand opening this morning of the new Ross Dress for Less store in the Harbour... read more