A Suffolk woman who has invested a lot of time and energy into teaching teens how to be safe around motorcycles was honored recently by the governor for her efforts.

Trish Adams has been riding motorcycles for 35 years, but it wasn’t until she and her husband joined Gold Wing Road Riders Association seven years ago that they started promoting motorcycle safety with teenagers.

“I truly believe that this program really makes a difference,” Adams said. “Students are learning more about motorcycles, which in turn helps them to become more aware of motorcycles out on the road.”

Her group held its first event in a K-Mart parking lot. A local truck driving school brought out one of its semi trucks, and the bikers in the group lined their motorcycles around the trucks.

Then, people were invited to climb into the cab and see how few of the motorcycles they could see because of the truck’s large blind spot. 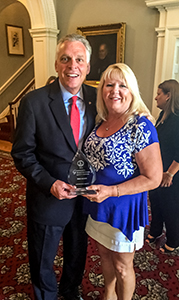 “It was a great day,” Adams said. However, she wanted to reach even more people, and get them at an age when they were younger and less experienced.

She and some other chapter members took a class with the Motorcycle Safety Foundation to learn how to coach students in driver’s education classes in local schools about motorcycle safety.

Five years and 10,000 students later, Adams said no person who went through the class as a teen has been in a crash involving a motorcycle, whether on the motorcycle or driving another vehicle.

“To me, that is really awesome,” Adams said.

The classes Adams teaches at local high schools talk about motorcycle safety laws, helmets and other safety gear, including reflective material, and more.

“Knowledge, to me, is power,” she said. “The more knowledge you have, the more power you have to be safe. It teaches more than what the books do.”

Adams said she has coached students at all three of Suffolk’s high schools, as well as at Indian River and Grassfield high schools.

“My goal is not to make students like or dislike motorcycles but to teach them to ‘look twice and safe a life’ so that the numbers in teenage accidents involving a motorcycle will continue to go down,” she said.

She hopes the program eventually grows to all of Virginia and that Virginia can become the safest state in America for motorcyclists.

Adams was presented the award for motorcycle safety at the Governor’s 2016 Transportation Safety Awards on June 28.

However, the true reward, for her, comes not only in the result of motorcycle safety but also when teens remember her when they see her at the school the following year.

“I am then truly honored,” she said. “I did my job. He remembered motorcycles.”