IW church in midst of renovations 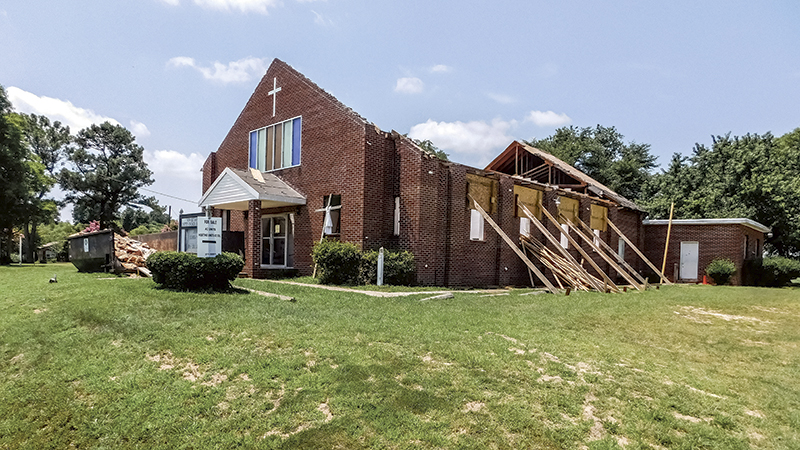 Several wooden braces align the sides of the New Bethany United Church of Christ building for support. The church was forced to replace its roof due to leakage.

Driving along Route 10 toward Smithfield, you may notice a roofless church.

Due to persistent leaks dating back to February of last year, New Bethany United Church of Christ was forced to replace its roof.

“The top was coming down — it looked like a horse’s back,” said Milton Wiggins, a church member.

Currently, wooden braces align the sides of the church for support. Also, the roof has been removed, leaving the interior exposed to the elements. 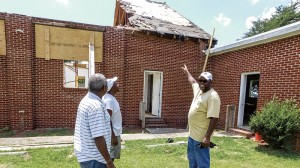 After the snowstorms in January, leaks occurred more frequently in the main sanctuary. The center of the roof sagged several inches, forming a rounded top.

The congregation was forced to have its worship services in the fellowship hall — located in the back of the church — on numerous occasions.

Folks at the church knew something had to be done.

Johnny Robinson, one of church’s trustees, contacted local engineers and architects to survey the roof. The general consensus was that the roof needed to be replaced.

In addition to replacing the roof, the church decided to renovate the interior. A & B Custom Design was hired for the project and began renovations in June.

The church plans to install new walls, air conditioning units and bathrooms. There are also plans to add a media room above the front entrance.

A & B Custom Design employee Henry Baham says that when renovations are complete, church members “won’t be able to recognize the building.”

Church renovations are expected to be complete by January. In the meantime, the congregation gathers at a building on Mercury Boulevard.

Despite the inconvenience, Robinson views the situation “as a blessing.”

“We asked for one thing, and God is giving us everything,” Robinson said.