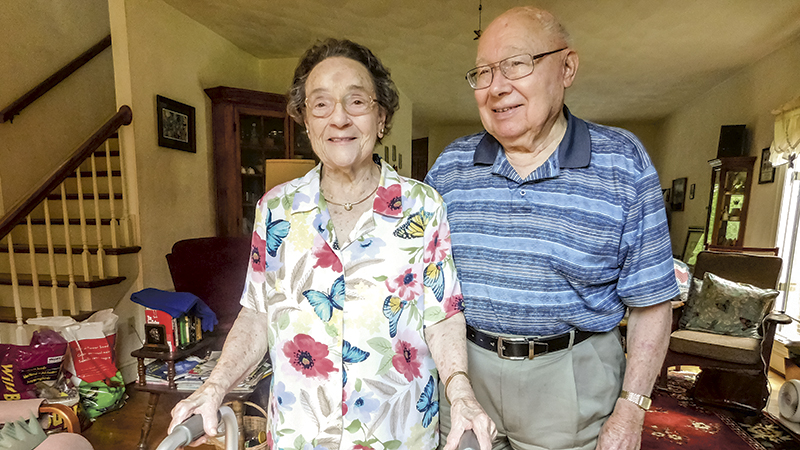 Laminated butterfly stickers adorn the windows of the Holland home in Windsor.

“They are a symbol of eternity,” Ivey Mae Holland said.

That seems fitting for a couple that celebrated its 70th anniversary on Wednesday.

The couple met in the early 1940s at a movie theater just outside of Windsor.

In the summer of 1946, 18-year-old Curtis and 16-year-old Ivey Mae tied the knot at Woodland Methodist Church in Windsor.

In their wedding picture, Curtis Holland “looks like the cat that got the canary,” said Frances Holland, the couple’s eldest daughter.

After serving two years in the Navy during World War II, Curtis pursued a career in life insurance. He eventually started his own company, Curtis Holland Insurance, in the early 1980s.

The 90-year old still runs the business by himself.

Growing up, the couple’s four daughters, Frances, Alice, Connie and the late Phyllis, often performed practical jokes on their “Mama” and “Daddy.”

A prank involving their father’s shaving cream stood out in particular.

One day, Curtis had run out of shaving cream, so he asked his wife to buy him more. In the meantime, Frances had switched out the old can for a new one.

When, Ivey Mae returned, she realized there was a new can and motioned Curtis over. With skepticism, Curtis sprayed the can, only to be doused in shaving cream.

“If we don’t have the ability to joke or get joked on, you won’t have a happy life,” he said Friday, recalling the event.

Frances said her father was a good sport and always had a positive outlook on life.

“Daddy always chose to see life as a glass half-full rather than half-empty,” she said.

The couple has celebrated its milestone anniversaries with family and loved ones. On Sunday, the family plans to celebrate at Wharf Hill Brewery in Smithfield.

“There will be four generations celebrating on Sunday,” daughter Connie Klass said. “Everyone is in awe. We all feel blessed to celebrate with them.”

Unlike in today’s society, divorce was not common several decades ago. The couple stressed that commitment is what has kept them together for so long.

“I promised I’d marry him till death do us part,” Ivey Mae said.

“You must go into marriage as a permanent engagement,” Curtis said.

Klass and her sisters try to mirror the qualities of their parents’ relationship in their own marriages and lives.

“My generation is easy come, easy go,” Klass said. “But, they are a true love story and the cornerstone of our lives.”