A studio from the past 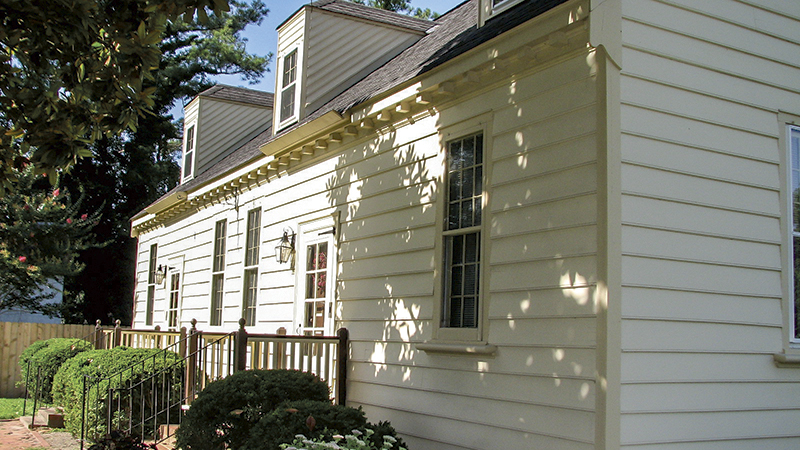 Nestled between North Main and Church streets within sight of the fleet of U.S. Postal Service vehicles is a scene straight out of Colonial Williamsburg.

The brick sidewalk and architectural style give it the feeling of another time and another place, and the only thing that jars the reverie is the sound of a letter carrier revving her engine to go deliver the mail.

Behind 429 N. Main St. stands a rather unique office building. A step inside the building does nothing to halt the fanciful notion that one has been transported outside 21st-century downtown Suffolk.

Robert Gillette, a former judge and commonwealth’s attorney, built the building in 1973-‘74 in order to move his law office out of the main house, where he and his wife lived at the time.

Everything old is new again. While the building is only 42 years old or so, the building material was reclaimed from buildings much older, giving the middle-aged law office the appearance of colonial times.

“I think he was really a visionary with how he built his office,” said Regina Brayboy, who lives in the main home now. “It could have just been a standard office building.”

The office building is about 2,200 square feet on two floors and also has a full basement. Brayboy said she believes the building would be perfect for a variety of businesses, from someone who just needs a basic business office to an artist looking for a studio.

In fact, she’s considering moving her pie business to the building.

“It’s where business and arts and the culinary district meet,” she said.

The second floor, she believes, would be perfect for a meeting space for small groups.

Outside, there’s enough parking space for about 15 cars — and, unbelievably, two more buildings on the property. One is a garage with a potential woodworking shop outside, Brayboy envisions. The other is a cozy cottage with a loft and working fireplace.

The main home, known as “Old Magnolias,” was built in 1837, after the fire that started next door and destroyed several surrounding buildings. It is so named for the two magnolia trees that used to stand on either side in the front yard. However, one was struck by lightning and subsequently cut down several years ago.

Landscaping and benches interwoven among the four buildings contribute to the historic feel.