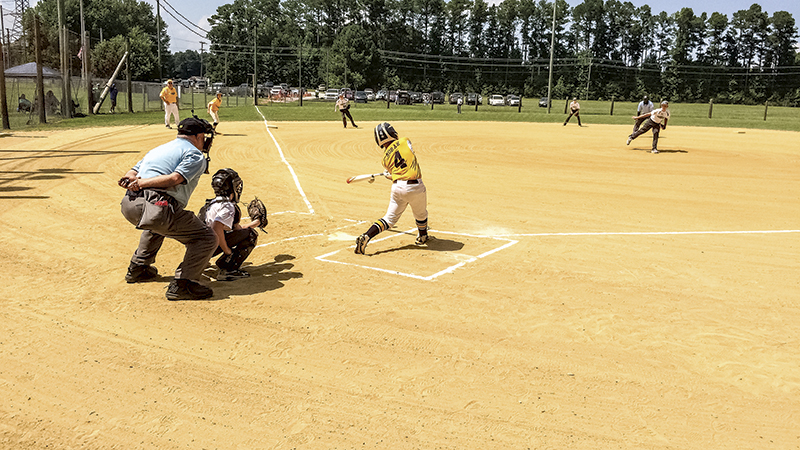 It seems like the season never ends for the people at Suffolk Youth Athletic Association.

SYAA has been hosting southeastern regional tournament for the Mustang and Bronco divisions of Pony Baseball this week. This tournament comes after a baseball season full of tournaments, with everything from invitational warm-up tournaments to the district championships two weeks ago.

“We’ve basically had a tournament a week since the middle of June,” said Jeff Beale, the baseball commissioner at SYAA.

SYAA president Darren Brown said the organization signed a contract to host the Pony regional tournament for three years. SYAA had hosted Pony tournaments before, but they were usually on short notice, when other athletic associations could not. Brown said SYAA had been lobbying Pony for chances to host, and when Pony asked SYAA to host the tournaments, the association agreed.

“They asked us, and we stepped up when they asked,” Brown said.

The tournament features four teams in each age division — Mustang, for ages 9 and 10, and Bronco, for ages 11 and 12. However, though the tournament is held at SYAA, no teams from Suffolk are participating in regionals.

“Our teams could have elected to forgo the district and sectional tournaments and qualify as hosts, but they decided to earn their way to the tournament,” Brown said. Unfortunately, the teams did not qualify.

The tournament features local teams such as Western Branch and Western Tidewater, as well as teams from as far away as Raleigh, N.C.

Though they knew the lack of Suffolk teams would be a possibility, Beale said it is still disappointing to have to run the tournament without a team playing in it.

“It’s like having a party at your house and not being able to be there,” he joked.

However, despite the disappointment of not having any teams playing in the tournament, Brown said organizers did not see a decrease in volunteers to help the regionals run smoothly.

“I think the folks that come and help out would have volunteered, regardless of what happened,” he said.

Brown and Beale said the volunteers are key to making sure the tournaments run smoothly. Several people are needed to help the organization prepare and operate an event that features eight teams and dozens of visitors.

“[Baseball/Softball Commissioner] John Brinkley has run it and done a great job, and there are a lot of guys and gals who help out almost every week,” Beale said. “People always ask what they can do to help.”

The tournament began Wednesday, and continues through today.

The winners of the regional tournament go on to the zone championships, which take place in Pennsylvania, instead of at SYAA.

Regionals will be SYAA baseball’s last big event of the summer, but that does not mean the work will stop. Registration for the fall season begins on Saturday.

So after months of tournaments and games multiple times each week, how do the commissioners and volunteers keep going?

“We keep getting the word out and asking, and people always show up to help,” Beale said.

Beale said running the tournaments in order to keep the youth active and having fun is its own reward.

“I love seeing the kids have fun,” he said. “The joy they get from playing makes it worth it.”