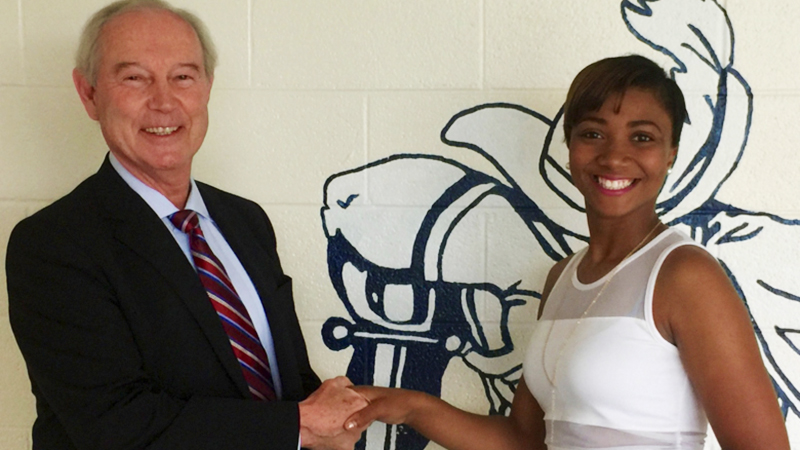 Paula K. Steward has been named the winner of the inaugural $5,000 2016 Ossie S. and Thomas F. Blair Jr. Memorial Scholarship, given by the Suffolk Foundation.

Substituting for his brother James Blair, who created the Blair Memorial Scholarship, Robert Blair presented the $5,000 Scholarship on behalf of the Suffolk Foundation to Steward on June 1 at the school’s senior awards program.

The Blair Memorial Scholarship to honor Tom and Ossie Blair was established in December 2014 by some of their children, whose parents instilled in them the necessity for and advantage of a formal education.

Steward demonstrated an extraordinary determination and commitment to obtaining her education. Not only did she graduate from Lakeland with academic excellence letters for 2013, 2014 and 2015, but she also obtained an Associate’s Degree in Arts & Sciences from Paul D. Camp Community College as a Dean’s List student in May.

Steward was also engaged in many extracurricular and community activities. She participated in Opportunity Inc., Stop Hunger Now and Ystreet. She was selected as a member of the SOAR Virginia Program, Upward Bound, HOSA and Emerging Scholars.

She also volunteered to be a student ambassador at PDCCC, serving as one of the student representatives of the college,.

Steward also served in the Air Force Junior ROTC from 2012 to 2016. Lt. Steward was selected the 2015 Outstanding Cadet of the Year, was promoted in 2015 from 2nd Lieutenant to 1st Lieutenant, and in 2015 her flight was selected as the Outstanding Flight for the AFJROTC group at Lakeland High School.

Her fellow students at Lakeland elecgted her junior class president. She was also selected to be a Peanut Princess in Suffolk’s Peanut Festival and was president of the Lakeland High School Prom Committee. Through all of this, Steward also worked part-time the past year and a half of school to contribute to her family’s income.

Two of Ms. Steward’s references captured her essence. One wrote: “I can think of no individual whose character and commitment better represent what society should support in our young people. I am confident that any investment made in Ms. Steward’s continuing education will be returned many-fold to society through her thoughtful and professional contributions.”

The second wrote: “Paula Steward is one of a small percentage of top-notch students who has left a lasting impression on me. I am confident that she will be extremely successful in achieving all of the goals she has set for herself, and I am excited to see all that she will accomplish.”

Steward will attend Virginia Commonwealth University in the fall, majoring in biology. She wants to follow a pre-med track and eventually wants to become an obstetrician/gynecologist.

Hurley named to Tufts dean’s list Michaela Hurley of Suffolk has been named to the dean’s list for the spring... read more