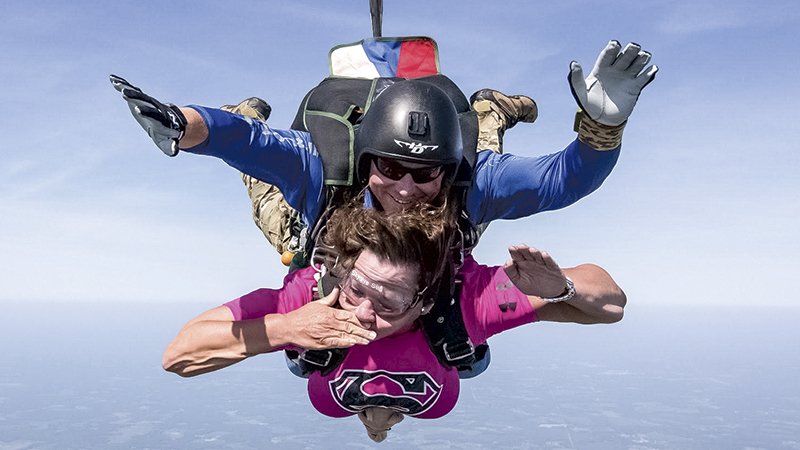 Beth Prever can finally cross something off her bucket list. For several years, she had wanted to go skydiving. But, it wasn’t until a recent health diagnosis urged her to go that she finally made the leap.

“It was exhilarating,” Prever said.

On Sunday, Prever, along with several of her friends, went skydiving at Skydive Suffolk. For each person jumping that day, Skydive Suffolk provided a $10 discount and a $20 donation to “Beth’s Brigade.”

The brigade consists of friends, family and supporters who are raising money for her long-term medical costs through the JT Walk on Oct. 9.

Prever’s family also sold food and refreshments on site, with the proceeds to be donated towards her brigade.

To date, “Beth’s Brigade” has 142 walkers and has already raised more than $27,000, according to the JT Walk website.

In April of this year, Prever was diagnosed with amyotrophic lateral sclerosis, also known as ALS. The diagnosis came unexpectedly as she gradually lost her ability to speak coherently.

“That is the worst news anyone can hear, because there is no cure, no treatment,” Prever stated in an email. “That needs to change, and raising money to pour into research is the best way I know to help.”

Prever, senior vice president of marketing and public relations at TowneBank in Harbour View, had raised nearly $800,000 for ALS research through the JT Walk over the last eight years, even before her diagnosis.

“Beth has been a champion for ALS research,” said Kathleen Petersen, the special events manager at The Virginia Gentlemen Foundation.

The JT Walk, now in its ninth year, has raised millions of dollars for ALS research and patient services. More than 30,000 people have gathered at the Virginia Beach oceanfront for the event, making it one of the largest ALS fundraisers in the nation.

Despite her diagnosis, Prever refused to stop.

“I’ve always had the confidence to do anything,” she said. “I have faith in God as well.”

Prior to her diagnosis, she had lost more than 100 pounds in two years. Her diagnosis is another challenge she hopes to overcome.

But, she couldn’t do it alone.

Prever has received an outpouring of support from the community, which she said has been “overwhelming and incredible.”

She has received calls, gifts and meals from various non-profits, her church, her neighbors, her high school classmates and her co-workers.

On Aug. 27, Prever’s high school classmates are organizing a block party at Baron’s Pub to raise additional funds for her brigade.

Next month, several restaurants and gyms in the Hampton Roads area are contributing to the brigade as well.

All TowneBank locations are accepting donations for Beth’s Brigade. The proceeds will go toward a trust fund to help with her medical costs. Checks should be made out to The Virginia Gentlemen Foundation.

A unique event for Suffolk

So you’re tired of the same old thing? Looking to inject a little mystery into your life? Well, well. You’re... read more