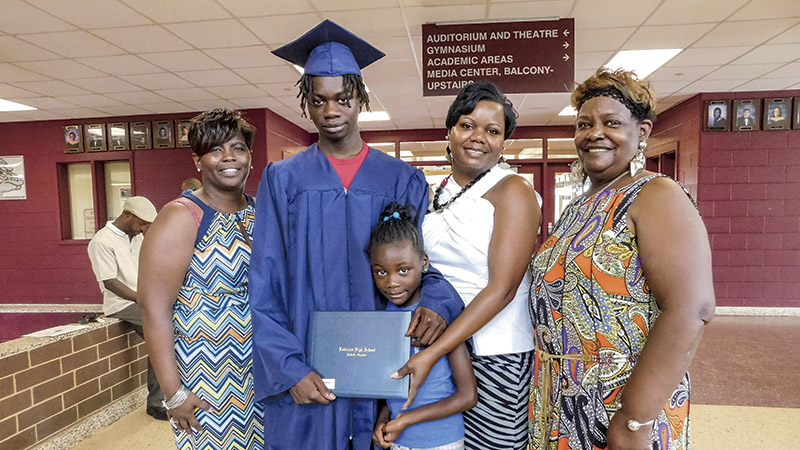 Larry Skinner Jr. was among the 38 graduates from this year’s summer school program at King’s Fork High School. He is accompanied by, from left, summer school teacher Shameka Council, his sister, Lamiah, his mother, Rhonda, and his grandmother, Vanito Goodman.

Despite not graduating with the rest of their classmates, the students remained resilient.

“They were focused and determined to get it done,” said Shawn Green, summer school principal.

Among the graduates were those aspiring to join the military and to go to college, according to Green.

Larry Skinner Jr., who only needed one more credit for graduation, says he had a lot of distractions during his senior year at Lakeland.

“Those things are irrelevant to me now,” he said.

Among the faculty were 20 teachers from the city’s high schools, who taught a variety of subjects.

Shameka Council, who was Skinner’s former English teacher at Lakeland and a summer school teacher, appreciated the contrast of the summer school learning environment.

“There is more one-on-one interaction and less distractions,” Council said.

Students had to learn a year’s worth of material in their respective subjects in just five weeks. The day began at 7:30 a.m. and ended at 4 p.m.

Rhonda Skinner, Larry’s mother, understood the program took a chunk out of her son’s summer but she was “excited and glad that he reached this milestone.”

“Everything happens for a reason,” she said. “This taught him that there will be a lot of sacrifices and trials in life.”

Green, who has served as an assistant principal at King’s Fork for three years, says the summer school was the “icing on the cake” for the school year. He knew a number of the students in the summer program and was proud to see them achieve their goal of graduation.

“I had the chance to bond with the students and to hear their stories,” he said.

Council and the rest of the staff were especially proud of the graduating class.

“I am proud of to see all of them graduate,” Council said. “They were determined to beat the odds.”