A united June at Mount Sinai 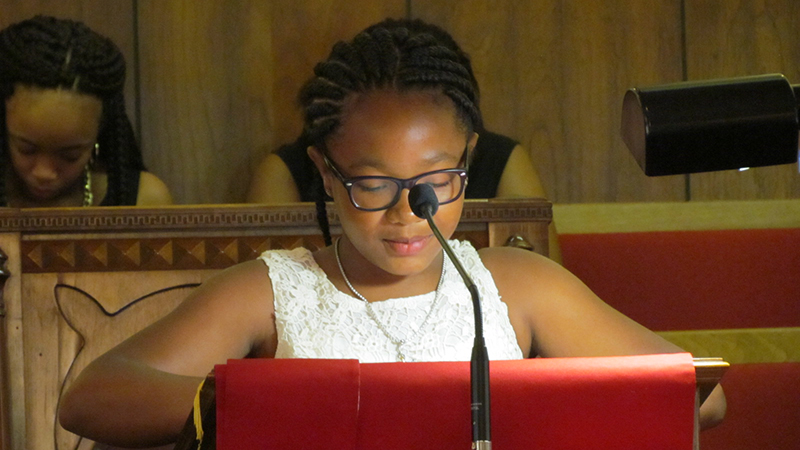 The “One In Christ” theme of Mount Sinai Baptist Church was on full display in the month of June, which featured Children’s Day and the fifth anniversary of its pastor, the Rev. Dr. William L. Lang.

Taking the pulpit on June 12 was rising fourth-grader and member of Mount Sinai, Kennedy Walden. A student at Pioneer Elementary School, she referred to the gospel of Mark 10:14-15 and chose as her subject, “What do you expect? I’m just a kid.”

She reminded the congregation of the need for those like her to embrace childhood because, regardless of their age, they are indeed learning.

“For example, from Superman, we learn that no one is perfect. Buzz Lightyear teaches us to reach for the stars,” she said. “But just as God used David, Mary and Jesus when they were children, he’ll do the same for us if we listen to His voice.”

Also on the program were Miles Barnes of First Baptist Mahan; Regan Booker, Union Bethel AME; a solo by Garrett Williams of Laurel Hill United Church of Christ; and soulful praise dancing from both the Young Believers of Pleasant Grove Baptist of Virginia Beach, and from D’Shawn Gibson of Missouri Baptist Church. The Children’s Day program was chaired by Mary Ann Williams.

Second, in a two-day celebration, June 25-26, including of a banquet and two worship services, the congregation and guests honored Pastor Lang, only the ninth in the church’s 148-year history. In closing remarks, Pastor Lang told of his vision of a unified church with its foundation of honoring and using the wisdom and experience of the seniors while encouraging the energy and creativity of the youth.

“Both were beautifully shown throughout this weekend,” he said.