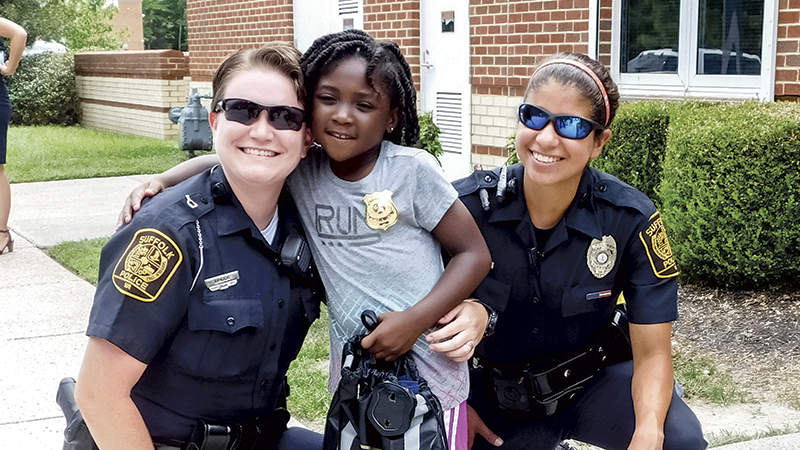 Sydnee Brown was all smiles after her latest encounter with a police officer — many of them, in fact — on Friday.

The Suffolk Police Department stepped in to cheer up 6-year-old Sydnee after an unfriendly encounter with a police officer in another city left her heartbroken.

Earlier this month, Sydnee and her mother, Miki Brown, went out to a restaurant for dinner. While at the restaurant, Sydnee encountered two police officers. She was excited, because she wants to be a police officer when she grows up, Brown wrote on Facebook.

But when she asked one of the officers if she could touch his badge and for a hug, she was denied both.

Miki thought the officer was just in a sour mood, but Sydnee was heartbroken.

“She asked me, ‘Why doesn’t he like me?’” Brown said. “Sometimes we have bad days, but to kids, perception is reality.”

In response, Brown wrote a Facebook post about the encounter and reached out to Suffolk Police about orchestrating something to help cheer her daughter up.

Within a few days, Sydnee received tons of support and “virtual hugs” from loved ones, from police departments outside of the commonwealth and from others she didn’t even know.

Brown was overjoyed by the support.

“This mom officially has tears of joy running down her face!! I really didn’t know it would be like this! I just wanted her to realize that police officers were here for her,” Brown stated in a Facebook post.

Suffolk Police wanted to go a step further to show their appreciation for Sydnee, so they helped orchestrate a tour of the Second Precinct on Bridge Road.

“We didn’t want the bad memory to stay with Sydnee,” said Sgt. Chad Hooker, an officer from the precinct who helped organize the tour. “We wanted to leave a positive impression.”

Sydnee got her fingerprints taken, viewed the holding cells and met a robot used for police missions, among others.

In addition, the precinct’s officers provided Sydnee with gifts, including a badge, a T-shirt, a policewoman figurine and a poster with signatures from the entire precinct.

Although she didn’t receive a hug from the other officer, Sydnee said she “got a lot of hugs” from several of the officers at the precinct.

The day was like “a dream come true,” Brown said.

In the midst of tensions between the police and the public, Officer Haley Brock, an officer from the second precinct, said it was “refreshing” to see Sydnee.

“It was awesome to see a young child excited to see us because her encounter could have made her afraid,” Brock said.

Several of the officers felt the other officer was out of line and wished Sydnee never had to experience the encounter.

“A child should lighten up your day — that’s the future,” said Jenn Brahan, an officer of the second precinct.