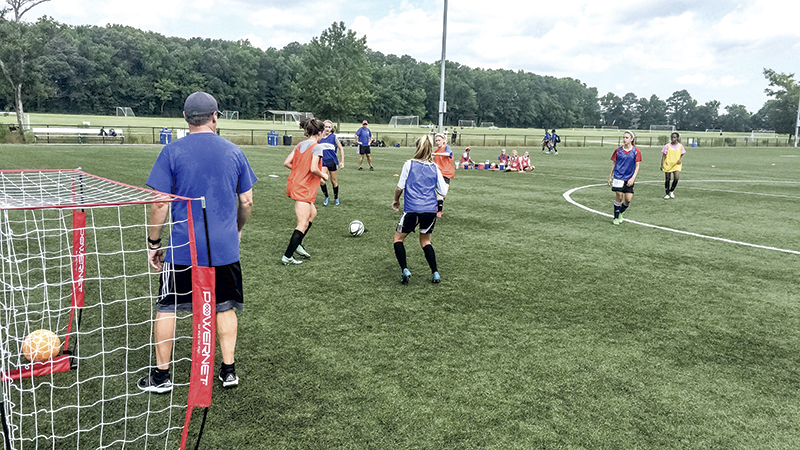 The Olympic Development Program for soccer players is growing young players into possible future Olympians as this year’s Games prepare to kick off this week in Brazil.

While the 2016 Olympic games are set to begin in Rio de Janiero, Suffolk’s soccer players are looking forward to developing for 2020 or even later.

Tryouts for the Olympic Development Program were held Friday and Saturday at the Hampton Roads Soccer Complex in Virginia Beach. Players from all over the area showcased their talents in attempts to join the prestigious youth soccer program.

Cash Castillo, a coach at Suffolk Youth Athletic Association, has multiple players who attended the tryouts. He said the amount of players who are attempting to make that level is encouraging for SYAA’s soccer program.

“It’s an amazing experience for them, and it shows we can produce those kinds of players,” Castillo said.

Whether or not they make it into the program, just having the ambition to make the tryouts is a positive thing, Castillo said.

“Being able to go out there is a huge accomplishment,” Castillo said. “They’re looking to better themselves, which will do better for their overall confidence and ability. If they do make it, it will give them that experience with elite players.”

Saturday’s tryouts were for the district level of the Olympic Development Program. The teams from each district compete against one another, and the best players are chosen to make up the state, regional and national teams for their age divisions.

“What we’re trying to do is identify individuals who might be motivated or capable of playing at a higher level,” said Bobby Galarneau, who evaluated the girls born in 2003.

The players gathered at the soccer complex to practice among their age group. The groups were divided by birth year, with the youngest being 2006 and the oldest 2001.

The ODP coaches took each group to a field and began fielding drills and scrimmages to evaluate the players.

Galarneau said the program looks for players who are talented individually and able to work with a team.

“We’re looking at technical ability, which means ball control, especially under duress, the ability to make quick decisions and the ability to know about personal shape and team shape, as well,” he said.

A variety of players from all over the Hampton Roads area gathered to test their skills.

Jacob Winnegar, who tried out for the 2001 boys’ team, said he hoped the program would help develop his skills as a player and help him eventually perform at a higher level.

“It’s all about getting more touches on the ball and playing as well as you can,” he said. “It’s one big training session to help you get better.”

On Friday, the players will discover whether or not they qualified for the district team. Though it’s impossible to take everybody, Galarneau said the experience is a positive one for everyone who tries out.

“It exposes them to the higher level of play,” he said. “They can see what it looks like and what they need to be working towards.”