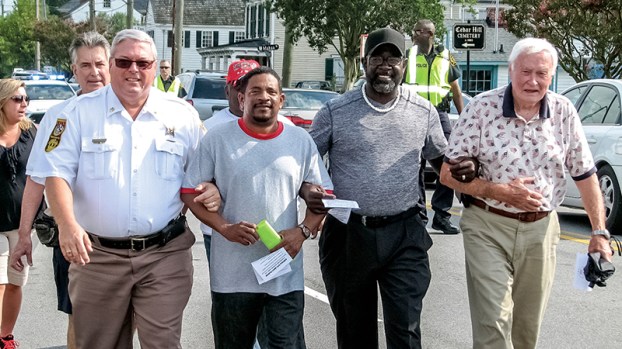 Barriers were broken, relationships were formed and unity got a little bit stronger in Suffolk on Tuesday night.

The annual National Night Out festivities were preceded by a Unity Parade, which saw elected officials, old and young and people of all races coming together to march down North Main Street with arms locked. Participants were asked to link arms with someone they did not already know as they walked.

“I can’t fix all the problems in the nation, but at least I can participate in events like this,” said Darrell Wade, a pastor of a downtown church.

He walked with Joseph Bass, who is from Chuckatuck. The two men shook hands and exchanged business cards at the end of the event. 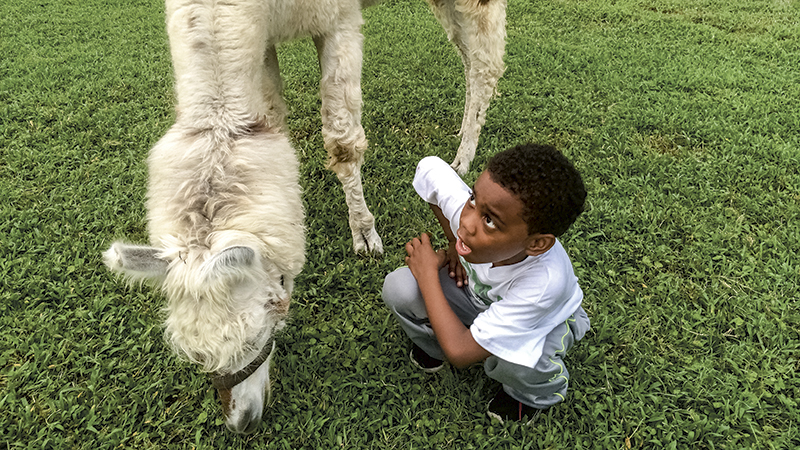 Everett Whitfield plays with an alpaca at Chuckatuck’s National Night Out petting zoo.

The participants marched from the Suffolk Seaboard Station Railroad Museum to the Suffolk Visitor Center, where the official kickoff took place.

“We need to keep working hard this year to keep that number down,” he said.

Moreover, he stressed the hard work needed to keep good relations with the community.

“The building and maintenance of trust takes a great deal of continuous effort,” Bennett said.

He listed measures the police department has taken to make them more effective, including receiving training in verbal tactics and crisis intervention. 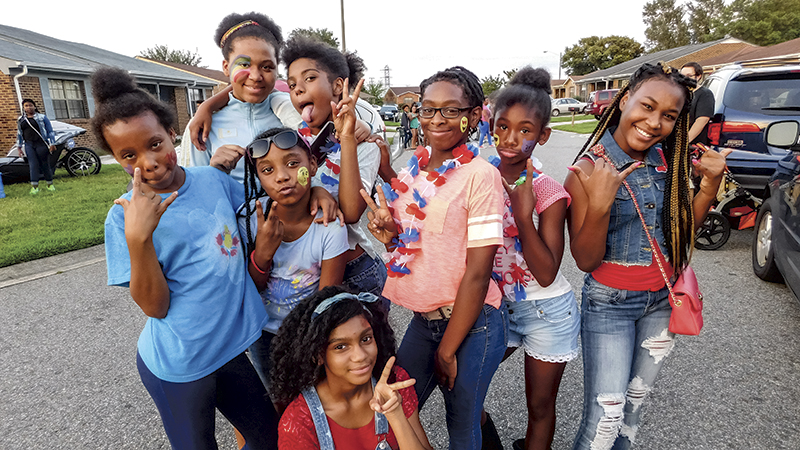 “Some of the negativity you see on TV may be the way it is in those jurisdictions, but it is not the way it is in the city of Suffolk,” he said, referring to news portrayals of poor community relations and the aftermath elsewhere. “That is not what it’s about in Suffolk, and don’t ever let anybody fool you to the contrary.”
At about 30 locations across the city, neighbors gathered by the dozens or by the hundreds to “give crime a going-away party.”

“It’s bringing everybody in the community together,” Bobby Knight Jr. said at the East Suffolk Gardens celebration in a neighborhood cul-de-sac.

Adults fried fish and grilled burgers and hot dogs while children chased each other and elderly residents sat and talked.

Perhaps the biggest celebration took place at King’s Fork Middle School, where people from more than a dozen communities in the area celebrated togetherness with music, food and activities.

The attractions at King’s Fork included a rock climbing wall, a petting zoo and musical performances.

Sentara Obici Hospital held a health fair inside the building, where they offered information on disease prevention, bone density tests and hands-on massages.

Outside, citizens mingled with police and fire and rescue personnel, promoting community togetherness.

“This brings us together,” said Jerry Britt, who has been attending National Night Out for nine years. “The young people get to see another side of the police.”

Britt said the main reason he comes to National Night Out is because his grandchildren love it.
“The kids enjoy coming out,” he said. “They get to be with the community. They love it.”

Across town in Chuckatuck, the Oakland and Chuckatuck communities met together at the Chuckatuck Volunteer Fire Department.

Volunteers served food under the roof of the fire department while music played and people danced outside.

The event featured a dunk tank, a bounce house, a petting zoo and cotton candy and snow cones.

Three-year-old Everett Whitfield paid particular attention to the animals at the petting zoo.

His grandmother, Lynette Wilson, said National Night Out offered fun activities for the kids, as well as a positive message for the community.

“It’s good that children see police in another avenue,” she said. “It brings trust among the people.”

North Suffolk had its share of National Night Out locations as well. Police officers, firefighters and community residents alike came together and enjoyed games, food and fun.

“This is a great way to meet who we don’t always see,” said Jenn Brahan, who attended the Burbage Grant event. “It’s easier make connections this way.”

The event allows residents to interact with officers and to ask them questions, which helps “humanize them,” said Pat Golay, also at Burbage Grant.

Various organizations and clubs were also in attendance.

“This is a good opportunity to get visibility and to recruit,” said Trent Spiroff, scoutmaster of Boy Scout Troop 911, while at the Burbage Grant event.

Attendees always look forward to National Night Out because it is a great time to network and to simply have a good time.

“There are no worries in the world,” Brahan said. “I’m happy to be out here.”