A renowned local novelist has collaborated with a Hampton Roads reading program set for next month. 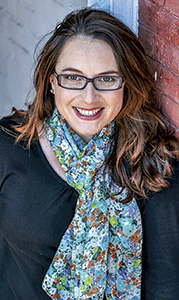 The Suffolk Art League introduced the reading program last year, and “Fahrenheit 451” was the book chosen. But, since Ray Bradbury, the author of the book is deceased, program organizers felt readers didn’t having a lasting connection with the book.

So this year the main objective was to grant readers access to the author, said Megan Mulvey, outreach and program services manager of Suffolk Public Library.

“We want the community to embrace this initiative,” she said.

Netzer was the perfect fit for the program for two reasons: She is a Norfolk resident, and her book received notable acclaim nationwide.

“She has a wicked sense of humor, she is down to earth, and it comes through in her writing,” Mulvey said. “It is very lyrical and almost poetic.”

In 2012, the book was named best book of the year by “Publishers Weekly” and “Library Journal” and it was a named a New York Times Notable Book.

The recognition was “surreal and a dream come true,” Netzer said.

The kickoff event for this year’s reading program will take place at the Virginia Air and Space Center in Hampton on Aug. 26. The venue connects perfectly to the book’s themes of space and exploration.

The “Blast Off Event” will feature refreshments and a meet-and-greet with Netzer. Additionally, the first 200 attendees will receive a free copy of her book.

On Sept. 30, Tidewater Reads will conclude with a question-and-answer session with Netzer and space-themed activities at the Central Library in Virginia Beach.

Asked how she would describe “Shine Shine Shine” in one word, Netzer said, “Change.”

During the 10 years it took her to write the book, Netzer was also going through several changes. She had moved from her hometown Detroit to Norfolk, and she had become a mother.

During this time, Netzer was overwhelmed with culture shock and new responsibilities. But it helped her “grow into who (she) is now and what (she) wanted to say,” she said.

The theme of change and her passion for space were the driving forces for her book. Norfolk also served as the setting of the book.

“There isn’t a lot of literature written about Norfolk and Hampton Roads,” Netzer said. “I want readers to recognize that the places they live in has literary merit. Don’t think of this area as devoid of culture.”

Everyone involved in Tidewater Reads is excited about the program. Mulvey hopes it instills a sense of discovery in participating readers and the Hampton Roads community.

“We hope it leads to self discovery,” she said. “We hope people become tourists of the Hampton Roads region, and we hope to get people out of their comfort zones.”