Robber gives up when clerk says ‘No’

A robbery at a 7-Eleven in Suffolk was foiled early Saturday morning when the clerk at the store refused to cooperate.

According to a report from Suffolk spokeswoman Diana Klink, police were called to the convenience store at the corner of Portsmouth Boulevard and Nansemond Parkway at 4:25 a.m., after a man fled the store following a failed robbery attempt.

Klink stated in a press release that the man had run into the store with a cloth item over his face. He asked the clerk to come to him at the register, but he did not display a weapon, and the clerk refused to comply. 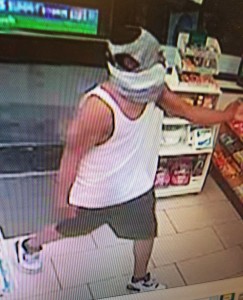 Police are asking for help identifying this man, who they say attempted to rob a 7-Eleven store on Saturday morning.

The man then ran off toward Nansemond Parkway.

The subject is described as a black male, approximately 5-foot-6 to 5-foot-7 and weighing between 200 and 225 pounds. He was wearing dark shorts, a white sleeveless T-shirt and a gray-and-white cloth over his face. 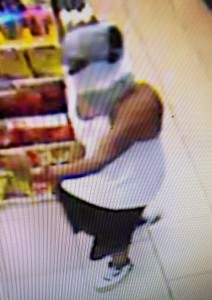 The man asked a clerk to come up to the register, but the clerk refused and the subject ran off.

Anyone with information is asked to contact Crime Line at 1-888-Lock-U-Up. Callers do not have to give their names or appear in court. Tips also can be submitted by visiting www.suffolkva.us/crimelinetips, by texting the word “CRIMES” (274637) with the keyword SPDVATIP or through the TipSoft mobile app. If information leads to an arrest, the tipster could qualify for a reward of up to $1,000.

The Suffolk Police Department has taken some unusual steps recently to help neighborhoods join the fight against crime. On the... read more