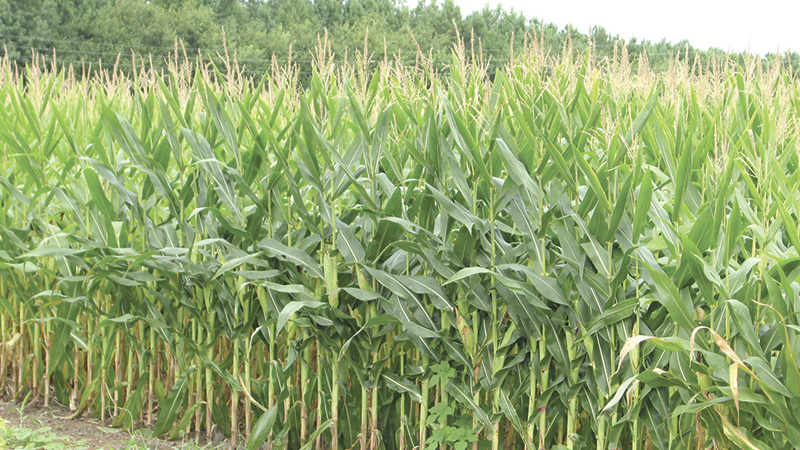 Corn grows in a field off Holland Road on Monday. Local farmers say corn has survived the recent heat wave well, but other crops have been affected by the wet weather.

Local farmers say a heat wave and lots of rain this season hasn’t affected the corn crop because of the timing, but other crops may not be so lucky.

The heat wave likely came too late in the corn crop’s life cycle to be much of an issue, Chuckatuck farmer Shelley Barlow said.

“If the heat had come earlier, the corn would have been hurt by that,” Barlow said.

“Most of the corn was planted early and pollinated ahead of the heat wave we’ve had the past couple weeks,” he said. “Any corn that was pollinating during the heat paid the price.”

Farmers remain optimistic about the corn.

“I think, overall, the corn crop is going to be good to very good,” Griffin said.

Crops like cotton and soybeans, on the other hand, have been affected by the excessive moisture.

“We were hoping for a year without very many challenges, but we feel like we’ve gotten nothing but challenges,” Barlow said.

A wet spring meant planting of most crops, particularly cotton, happened late. Farmers are hoping their plants will make up for lost time.

“We feel like the cotton plants will make up for a lot of that, but we’ve kind of lost three weeks’ worth of blooms,” Barlow said. “Cotton is very forgiving. It will compensate. But I need those extra three weeks in the fall.”

Even so, Barlow said, “I’m looking out my front window right now, and the cotton is beautiful.”

Griffin also estimated the cotton crop is two to three weeks late spread across the area.

“There’s a small amount of cotton that did not get planted, because of excessive rainfall,” he said.

“Some of them got drowned out by too much rain just in the last two weeks, and it’s going to be an impact,” Griffin said.

Barlow said the heat doesn’t usually have a big impact on the farmers themselves, since most cabs on tractors come with air-conditioning these days.

But smaller jobs that don’t require a tractor have to be moved to early-morning or evening hours, when the heat isn’t as brutal, Barlow said.

“That’s probably the biggest impact for people that have to work out in it,” she said. “You have to change your schedule.”

Barlow also said commodity prices are another reason for farmers to be optimistic about this season.

“Cotton has had a good run-up in price, and that’s making us feel a lot better,” she said.