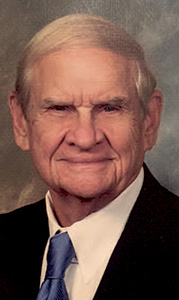 Robert Randolph “Jack” Chapman Jr., 84, beloved husband, father, grandfather, brother and friend, passed away on Aug. 6, 2016. Born on May 8, 1932, in Suffolk, he graduated from Suffolk High School in 1951 and attended VPI prior to his service in the U.S. Navy from 1951 to 1954 during the Korean War. Following his naval service, he attended the University of Richmond, where he was a member of the Sigma Alpha Epsilon fraternity. He had a deep love of the Navy, which continued throughout his life in many ways: as a member of the Navy League of the United States, U.S. Naval Institute, and the U.S. Navy Memorial. He was also a charter member of the National WWII Memorial.

He was employed by the Virginia Department of Highways for 55 years, last serving as District Right of Way engineer before retiring in 1999. Following retirement, he and his wife enjoyed traveling. He was happiest when surrounded by his family, who loved him deeply.

Jack was a friend to all, and no child ever came to his door without making a sale for their school, Girl Scouts, etc. He never missed an opportunity to lift a stranger up in some small way. Jack was grateful for his friends and held each of them in the highest regard.

Jack was a lifelong member of Suffolk Christian Church, where he served as deacon for several terms, superintendent of Sunday school, church treasurer, and an active member of the Baraca Men’s Sunday School Class. He was named deacon emeritus by the church, an honor that meant much to him. He deeply loved his church, which was always central in his life.

Jack was a member of the Norman R. Matthews American Legion Post 57, where he served as past commander, Master Mason and member of the Nansemond Lodge 77, the Suffolk Shrine Club and the BPOE Elks Suffolk Chapter 685, having served as exalted ruler. He was also a longtime volunteer at Obici Hospital and was a regular Red Cross blood donor for 66 years.

A celebration of life will be held on Wednesday, Aug. 10, 2016, at 1 p.m. in Suffolk Christian Church, 216 N. Main St., Suffolk, with the Rev. Michael Halley officiating. Following the service and reception, the burial with military honors will be conducted in Cedar Hill Cemetery. The family will receive friends in the R.W. Baker & Co. Funeral Home and Crematory, Suffolk, on Tuesday, Aug. 9, 2016, from 6 to 7:30 p.m. Donations may be made to Suffolk Christian Church. Condolences may be registered at RWBakerFH.com.