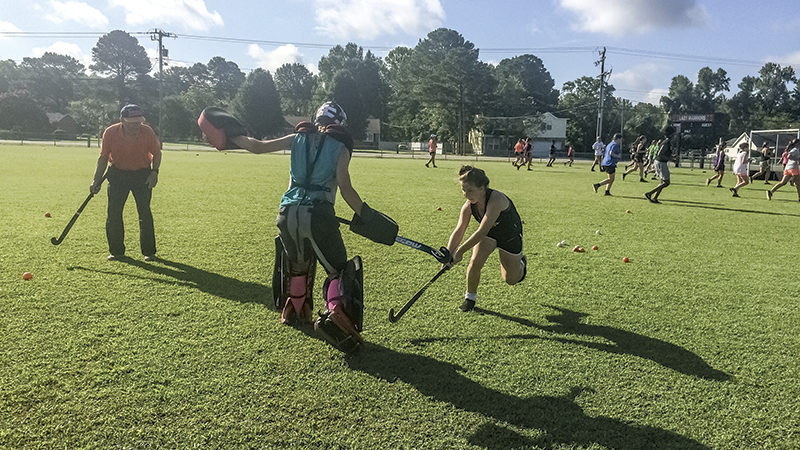 “I think at first we thought it would be more of a rebuilding year,” Dize said. “When we started preseason, we realized we haven’t taken any steps back.”

The Warriors finished last season with a 12-3 regular season record, finishing second in the conference behind Gloucester, a team Dize described as a “powerhouse.”

Dize said the team plans to better its results, especially against big teams like Gloucester.

“In the Southeast District, we faced Lakeland and Hickory, which were two losses,” she said. “Gloucester, who won the conference, was the third. We hope we can turn those results around this year.”

The Warriors are coming off a season where they scored 79 goals, the highest total reached since Dize took over as coach.

“We can be a real offensive powerhouse this season,” she said.

Dize said the team had a deep roster of talent last year that will get more time to shine in the upcoming season. Players that spent time on the bench last season will be moved to starting positions, Dize said.

“I think the girls will step up to the challenge,” she said.

The team is led by three seniors: Ariana Samuel, a forward; McKenzie Roach, a back; and Victoria Czuplynski, a back.

Though the team’s seniors will be the leaders, the key player everyone will be paying attention to is Ashlyn Rogers.

Rogers said she hopes to be a part of a successful season and lead the team on the field.

“I just want to play as well as I can,” she said. “I know I’m going to have to lead by example, and it’s a good feeling.”

Dize said she hopes Rogers’ individual development in the offseason, playing in the Junior Olympics, will give the team a boost.

“I think it makes everyone better to have that experience on the team,” she said. “We’ve seen great progression in individual skills from last year, we just need to work to put that together in the team.”

Though Rogers may be looked at as the key to Nansemond River’s success this season, she said having a quality team around her takes the pressure off her back.

“I know the team has my back always,” she said. “If I have a bad game, I know they’ll help me pick it up and do better the next time.”