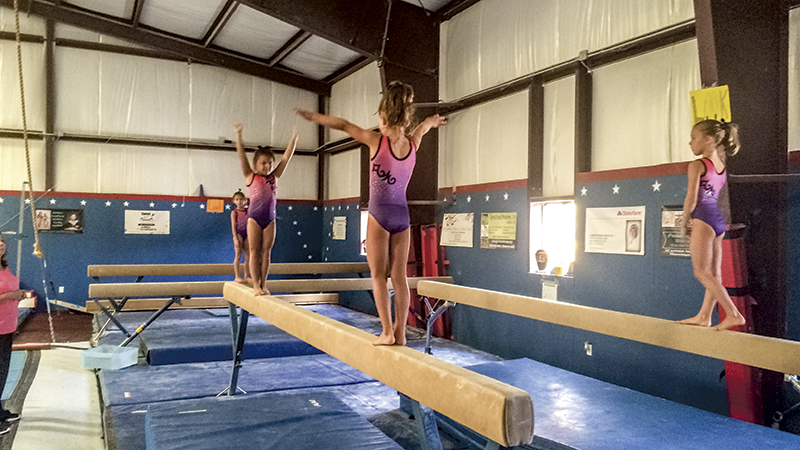 Coastal Point gymnastics team members practice on the balance beams. Deborah Burgsteiner, who formed the team with her son, Kyle, helped the gymnasts with their form.

While the American gymnastics teams show their dominance at the Olympic Games, local gymnasts have been working hard to eventually make it to the same level.

Registration for fall classes at Windsor Gymnastics opened on Monday. Owner Pat Tribby said the success of American athletes at the Olympics has helped increase the profile of the sport, and will give Windsor a boost in registration.

“You always get a bump in signups because of the Olympics,” she said. “We’ll probably see about 75 more people.”

Windsor Gymnastics offers gymnastics and tumbling classes for a variety of ages, allowing young gymnasts to learn the techniques they see from the elite athletes on TV.

Windsor Gymnastics also offers cheerleading and dance classes at their location. Classes begin Sept. 6. Information on the classes and registration can be found online at www.windsorgymnastics.org.

Tribby said gymnastics classes are great even for kids who might not want to be the next Simone Biles or Aly Raisman.

“It helps with strength, flexibility, discipline and setting goals,” she said.

Windsor also hosts a competitive XCEL team, which athletes are invited to if they show natural ability.

The gym’s manager, Nici Marshall, said even though the gym offers registration year-round, the upcoming season will be particularly busy because of the Olympics.
“It will definitely impact us positively in the fall,” Marshall said.

While signups for classes will definitely increase, Marshall said the hype around the American gymnastics teams has benefited the teams that compete at World Class.

“We had a viewing party for the women’s all-round final on Tuesday,” she said. “It was a great bonding experience. It gets the girls really excited to compete and get to that level.”

World Class offers multiple teams for promising gymnasts to show off their abilities. One option is the Junior Olympics program, which offers different levels of competition for separate age and skill levels.

For the first three levels, 3-5, gymnasts all do the same routine in competitions. In level six, they start being able to design their own routines. From level eight upwards, the athletes compete at a higher level, working their way through state, regional and national competitions.

“They will travel and compete with their teammates from our other location,” Marshall said. “We’ve had a lot of success at this level, with state and regional champions.”

World Class also offers an XCEL team for athletes who want to compete, but do not want the time commitment that comes with being part of the Junior Olympic program.

World Class holds open tryouts from their classes and development programs every May, where gymnasts can be selected to join some of the teams.

The Coastal Point gymnastics team, run by Deborah Burgsteiner and her son, Kyle, was created to offer the most competitive gymnastics program possible.

“What we do is a step above Junior Olympics,” Kyle Burgsteiner said. “They can qualify for Olympic training if they do well enough.”

Coastal Point features gymnasts from the Hampton Roads area as well as North Carolina. Though Coastal Point holds their practices at Windsor Gymnastics, the two are not associated. The team is generally invite-only, since it offers a high level of competition.

While Suffolk’s current gymnasts have not reached the Olympics level yet, athletes work hard and train to eventually reach the level of their heroes.

Addison Parkman, a 9-year-old Suffolk native who is on the Coastal Point team, said the Olympic Games inspire her to work on her gymnastics.

“I want to be like them,” she said. “I think it’s fun, and I want to keep working to make it to the Olympics some day.”