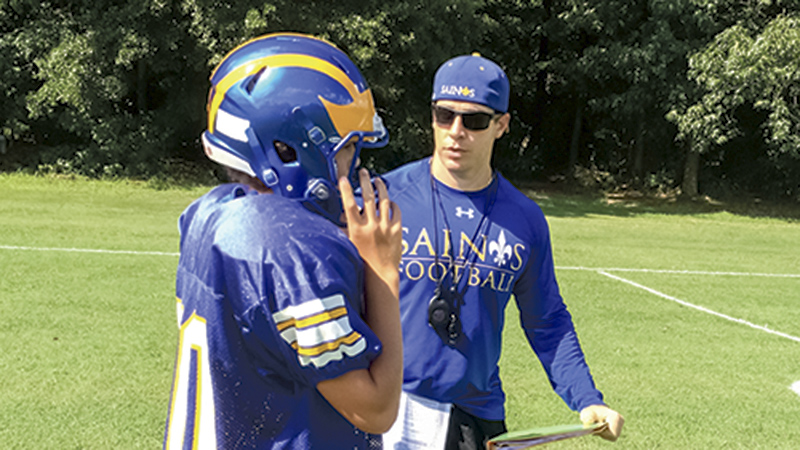 Nansemond-Suffolk Academy head football coach Mike Biehl speaks to one of his players during practice. Biehl said he is implementing a new offensive strategy for the upcoming season.

A new coach and a blank slate at NSA

After last year’s state-title-winning season, Nansemond-Suffolk Academy’s football team finds itself in a time of transition with a new coach, a new philosophy and a small, but talented, team.

It is Michael Biehl’s first head coaching job, after 10 years as an assistant coach at the college and high school levels.

“It’s an absolute privilege to be able to call myself the head football coach,” Biehl said. “It’s an opportunity every coach wants.”

Biehl spent the last five years as an assistant coach at Tallwood High School in Virginia Beach, serving as a defensive coordinator, offensive coordinator and safety coach over his time at the school. He said his experience in different roles helps him see all the aspects of the game as a head coach.

“I wore multiple hats to be prepared for this role,” he said. “You need that experience so you can see from all the different perspectives.”

Biehl has the tough task of taking over for legendary coach Lew Johnston, who coached the Saints for five years, leading them to a Virginia Independent Schools Athletics Association Division III state championship last season to close out his 41-year coaching career.

Though Johnston may have set the standard for success in his time at the school, Biehl said each new season has to be treated differently.

“Any time after a season like that, the immediate thought is to repeat,” Biehl said. “But after each season, a new team emerges. We’re asking people to step into new roles and do new things.”

Some of the changes Biehl is implementing were brought about by necessity. Seventeen members of the title-winning squad from last season graduated, leaving Biehl with a smaller roster that is missing some huge stars.

In addition to having to rebuild from last season, Biehl is also implementing a new offensive strategy for the team.

“Whenever you have a team like this, you want to keep the things that were successful,” he said. “Coach Johnston and I have different philosophies, but we have the same core values. The values of the team haven’t changed.”

Biehl said he wanted the team to display togetherness and a desire to succeed.

The Saints gathered at the football practice field on Tuesday afternoon. Biehl gathered the team into a huddle for a talk before practice. Biehl’s short speech told the team what he expected of them: desire and hard work.

Players joked as they warmed up for practice, but each time a new drill began, the players clapped in unison, showing the unity and attentiveness their coach demands.

Before practice began in earnest, Biehl brought the players together, hyping them up for their first game on Friday.

“It’s game week, it’s game week,” he told them. “If we want to win on Friday, we’ve got to put in the work on Tuesday, Wednesday and Thursday.”

The Saints hope to get off to a winning start against Portsmouth Christian School on Friday night. Though preseason has been promising, Biehl said, the team’s small roster could make the season difficult. However, Biehl says he plans to make the Saints football team into a long-term project.

“I think any time you’re taking on a new situation you expect to be there for a long time,” he said. “But for now we’ll take it one day at a time and do as well as we can.”