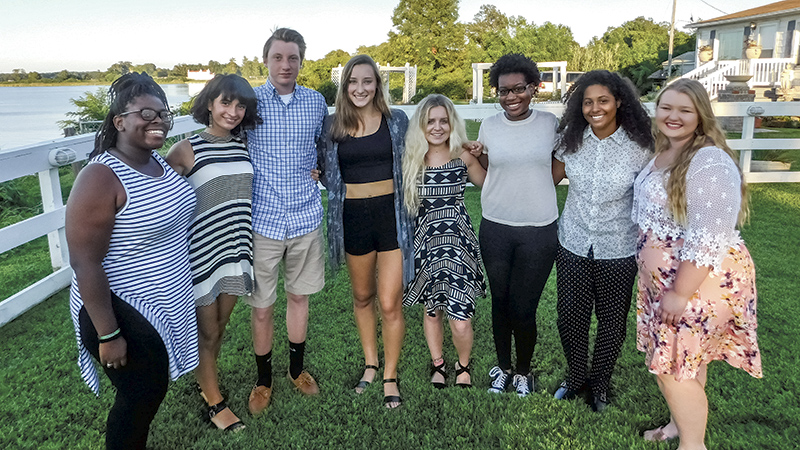 Suffolk Sister Cities International hosted a dinner Tuesday to celebrate students who participated in this summer’s program. Family, friends and city officials were in attendance.

The organization sponsored two groups of students this year. One group attended the Youth Leadership Summit in the nation’s capital, and the other visited sister city Oderzo, Italy, for just under three weeks.

Both groups were equally impacted by their experiences.

“I was visiting all the different places and countries through the people,” said Donielle Blake, one of the students who attended the summit.

“Everywhere you go looks like a painting,” said McKayla West, one of the students who visited Oderzo.

The students were a mix of local public school and homeschooled students. One Italian student, Lucrezia Cadamuro, visited the United States during the exchange.

However, there was one thing in particular she didn’t like.

“She didn’t like root beer floats; she said it tasted like mouthwash,” said Kristin Johnston, whose family hosted Cadamuro during her stay.

This year’s leadership summit was the largest to date, attracting 115 high school students from across the globe. During the four-day program, students participated in diplomatic simulations, listened to keynote speakers and also visited various landmarks and buildings.

The students that traveled to Italy cherished their time there.

“I made lifelong friends there and the [host] family really tried to make me comfortable,” West said.

Cadamuro also had some lasting impressions about the U.S. and how it compares to her homeland.

“We only care about our past,” she said of her home. “Here, we concentrate on our future. In Italy, if you were born like that, you will stay like that. Here, you can be born like that and can change it. It is the American Dream.”

Sister Cities International was founded by former president Dwight D. Eisenhower. He sought to involve all citizens in a grass-roots effort to promote world peace.

Since 1967, more than 550 U.S. cities have partnerships with communities in 150 countries around the world.

In 1981, the Suffolk chapter began its program with Suffolk County in England. In 1995, Oderzo, the birthplace of Amedeo Obici, founder of Planters Peanuts and Obici Hospital, was added as a sister city.