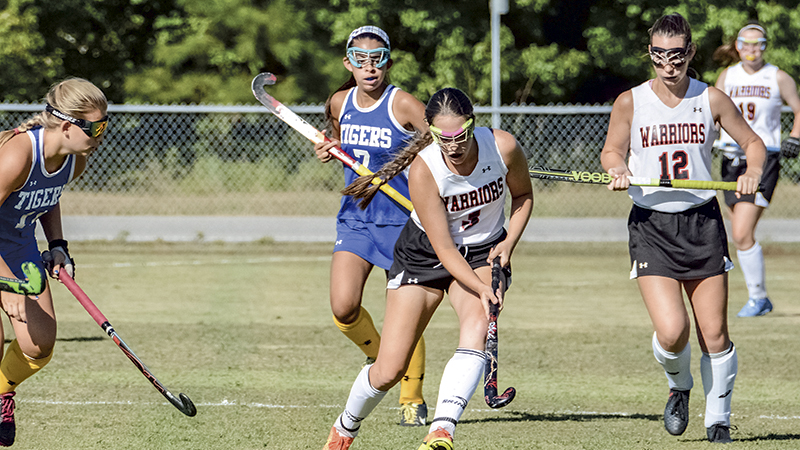 “This was a great start to our season,” coach Allison Dize said. “We came out firing. We dictated the tempo from start to finish.”

Last year the Lady Warriors finished the season with a 12-3 record during the regular season, but a loss in the second round of the playoffs left them at 13-4.

This year the Lady Warriors are looking forward to what is in store the rest of the season. One thing the team has improved is its scoring. Dize said last year the team might have won that game with a score of of 3-0 or 4-0, so the increased scoring is a pleasant adjustment.

After having a solid season last year, there were a couple things Dize wanted her team to improve.

“I wanted us to improve our defensive positioning coming into the year,” she said. “I don’t want us chasing people around. I want us to just pressure them. Let them make the mistakes.”

“She’s a selfless player,” Dize said. “She works hard, and her teammates reward her with opportunities for goals.”

Rogers, Samuels and Mackenzie Roach are the captains for this year. Dize said she could have picked from numerous girls on the team, because of the strength of their leadership. She expects everyone to make an impact at some point. No drop-off is expected from this group.

“I really have a good group of girls,” Dize said. “My girls gel well together, and they play every game like it’s their last.”

This year, the Lady Warriors want to improve with each game and slowly close the gaps on teams like Hickory High School and Gloucester. Having a strong team helps with discipline, as the players already know what to expect of each other and from their coach.

Next for the Lady Warriors is an away game on Monday against Deep Creek at 5 p.m.

Football season is officially under way for three of Suffolk’s high schools. All the off-season conditioning, weight training, running, and... read more